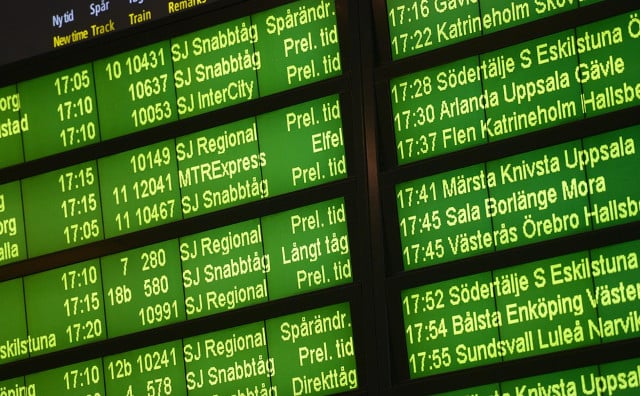 Train traffic was hit by problems in a tunnel. Photo: Fredrik Sandberg/TT

Trains between Södertälje and Flemingsberg were the first to be affected, but delays also subsequently hit trains from Stockholm, Nyköping, Malmö, Copenhagen, Gothenburg, Oslo and other cities that pass through the region just south of the Swedish capital.

Traffic was halted entirely for around 20 minutes, and though one line has been reopened commuters will notice the backlog.

“On one of the train lines there’s a 40 minute delay, on the other around half an hour,” Denny Josefsson from the Swedish Transport Administration (Trafikverket) told news agency TT.

When workers arrived at the site where the problems originated they found a stone block had fallen from the roof of a tunnel, causing a power outage that stopped traffic on the line.

“We'll take a tunnel expert there to see if there’s a risk of further sections falling, and then decide on what we’ll do,” Josefsson explained.

READ ALSO: Here's how many trains arrived on time in Sweden last year