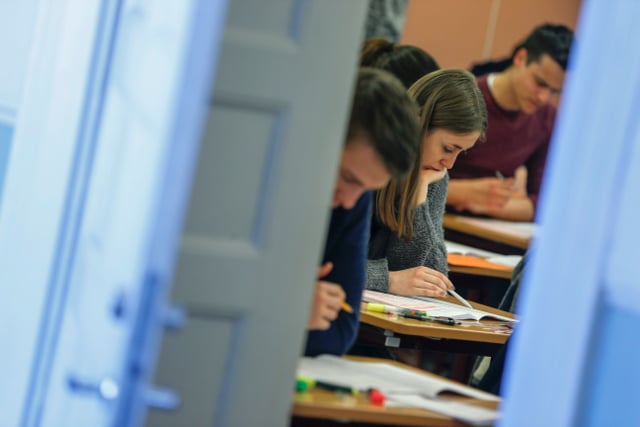 File photo of students sitting the Swedish SATs in 2013. The students pictured are not suspected of cheating. Photo: Fredrik Sandberg/TT

Every year, tens of thousands of people sit the Swedish Scholastic Aptitude Test (SweSAT, or högskoleprovet). The exam is not compulsory, but prospective students can use their results to help them get into university.

Cheating has been a problem for years, with authorities struggling to identify the offenders. But on Saturday, while the exam was taking place, the Swedish Economic Crime Authority hit several addresses in a raid.

Three people have been arrested so far, and prosecutors warn more are to come.

The network at the centre of the affair is said to have been operating for four or five years, marketing itself online and on social media and has been using advanced equipment including earpieces.

“This is very serious from a societal perspective – both legally and morally. They have contributed to people being able to buy places on attractive courses,” prosecutor Per Hedman told the TT news agency.

One of the three people arrested – a father and his two sons – was an exam invigilator. The trio deny any criminal offence but have made “certain confessions” according to prosecutors, reports TT.

Around 70 people are believed to have cheated on this year's SweSAT test, which was held in 120 locations in Sweden and abroad. More than 75,000 people in total had signed up to sit the test.

The Swedish Council of Higher Education said it had first been tipped off to organized cheating with the help of earpieces in autumn 2015, and has since been trying to crack down on it.

Measures have included increasing the number of invigilators and making people hand in their mobile phones during the test. Discussions have also been held about frisking people before they enter the exam rooms.

The Council of Higher Education also started carrying out more comprehensive analyses of people's exam answers, which led to around 50 people being discovered cheating.

Six of these had to terminate their university education (five medical students at Karolinska Institute – which has some of the toughest entry requirements in Sweden – and one at KTH Royal Institute of Technology).