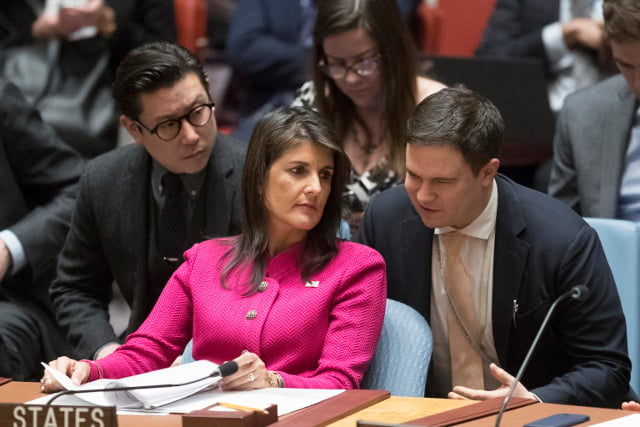 US Ambassador Nikki Haley and her Russian counterpart Vassily Nebenzia will  be among the 15 ambassadors joining Secretary-General Antonio Guterres for the  secluded getaway in a country setting.

The three-day retreat beginning Friday comes after one of the council's most divisive periods, with the United States and Russia split over the alleged chemical weapons attack in Douma that lead to military action by Washington and its allies against Syria.

MORE ON SWEDEN AND THE UN SECURITY COUNCIL: Sweden's ambassador to the UN speaks to his UK and US counterparts. Photo: AP/Julie Jacobson

The council met five times on Syria last week including on Tuesday when Russia vetoed a US-drafted resolution setting up a chemical weapons probe while two other proposed measures failed to pass.

The Russia-US rivalry prompted Guterres to declare that the Cold War was “back with a vengeance.”

Asked whether he expected awkward moments during the Swedish retreat, Nebenzia told reporters: “I will see how they feel about dealing with me after all that happened.”

“It's not news to anyone that the council is divided on Syria,” said Sweden's Deputy UN Ambassador Carl  Skau. “There is some need for humility and patience at this moment.”

Roll up your sleeves

The council will be staying at Backakra, the summer residence of Dag Hammarskjöld, who was the United Nations' second secretary-general.

The residence located on the southern tip of Sweden, far from Stockholm, is a “fitting and inspiring venue” to reconnect with the power of diplomacy, said Skau.

“It's a place to roll up our sleeves, take off our jackets and ties and come up with some real and meaningful ways forward,” he said.

The annual brainstorming session usually takes place in upstate New York, but Sweden, which is a non-permanent council member, offered to host this year's gathering.

Guterres had told council members that the focus of the meeting would be his plan for a “surge of diplomacy” to address conflicts worldwide, but the council's deadlock over Syria is emerging as the top priority.

Despite tensions with Russia over the poisoning of ex-Russian spy Sergei Skripal, British Ambassador Karen Pierce said she wants to “work with Ambassador Nebenzia to ty to make progress on getting back to the political process in Syria.”

Sweden has presented a draft resolution on sending a UN mission to rid Syria of its chemical weapons stockpile once and for all. In February, it led negotiations with Kuwait on a ceasefire resolution that never materialized.

France, the United States and Britain have put forward their own measure on ending the use of chemical weapons in Syria and re-energizing peace talks.

The retreat will not primarily be a negotiating session on the various draft resolutions on Syria, said Skau, but he did not rule out such talks.

Sweden is worried that divisions on Syria could spill over and affect diplomacy on other conflicts, plunging the council into all-out paralysis.