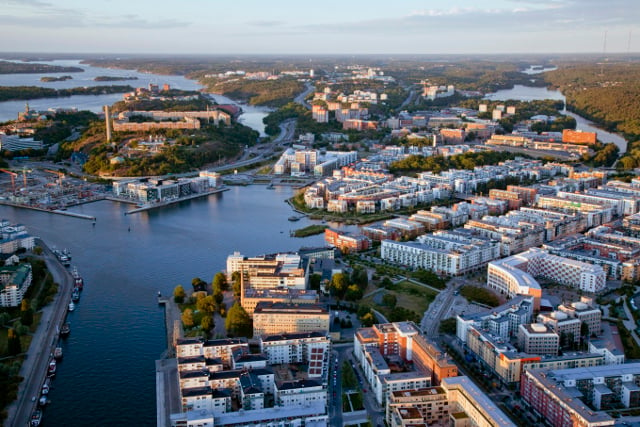 Take the metro red line from Södermalm towards Fruängen and you'll find that Stockholm's hipsters have spread further south than Hornstull these days. In Midsommarkransen and nearby Telefonplan there are clusters of cafes, indie cinemas and art spaces that have given these neighbourhoods their place in the capital of cool.

Midsommarkransen is packed with many well-loved restaurants including Svenska Sushiköket, a sushi kitchen on a pretty, leafy corner of Tellusborgsvägen, and the highly-rated Tellus Pizza across the park on Vattenledningsvägen. Just opposite is Tellus Biocafe, a 1920s cinema that plays Swedish and international indie films, hosts live music and even language cafes.

Get back on the metro and continue one station to the south to Telefonplan, home to Sweden's largest art college, Konstfack and the technology and business school Hyper Island.

In the centre of the complex is Colour by Numbers, an industrial tower with a light installation that lets you control the colours via its app. Here you'll also find Stockholm’s biggest indoor rock climbing centre, Klättercentret. After a good workout, wind down at A.B Café, best-known for its fresh breakfasts and unfussy, Scandinavian design. And don't miss local favourite Landet, a bar and restaurant which hosts live music and even DJ sets from well-known Swedish musicians. One of the most luxurious postcodes outside of Stockholm's city centre is the north-eastern island of Lidingö. Dotted with beautiful and colourful villas around a neat, red-brick centre, Lidingö is a high-end area that is becoming more than just a playground for Stockholm's rich and famous.

Here you'll find popular bakeries like the gorgeously-tiled Lidingö Bröd och Patisserie and highly-rated restaurants such as Italian pizzeria 450 Gradi. It is also home to one of Stockholm’s best art galleries, Millesgården, which displays contemporary and historical work by Swedish cultural icons, like the original drawings and portraits from creator of The Moomins, Finnish-Swedish Tove Jansson.

READ ALSO: Lidingö and what you can get on Sweden's property market for one million

Lidingö lies just off the metro map, but if you take the red line northwards all the way to Ropsten, you can transfer to a tram that nips up and down Lidingö's west coast. At its final stop, Gashaga Marina, you can enjoy dinner with a view at Bryggan Seaside Diner. At a southern end of Stockholm's green metro line is Farsta Strand, or only fifteen minutes to the centre by commuter rail, where there are plenty of beaches along lake Magelungen.

This is more than just an area for summer bathing, however. Farsta is growing quickly, and there's now plenty to shout about: from commissioned graffiti murals to a shopping mall at Farsta Centrum that caters for pretty much everything. Exciting new eateries are also putting Farsta firmly on the map: local critics, Stockholm Burger Dudes have named Farsta Strand's Bun Meat Bun the seventh best burger restaurant in Stockholm.

Head up the road to Hökarängen, a sub-district of Farsta, to Konditorn & Bagarn, a bakery whose reputation and oozing waft of baking cinnamon buns has locals queueing out of the door.  Whilst you're there, drop in on Konsthall C, a communal laundry room turned into an arts space which always has free admission.

Once synonymous with 70s apartment blocks and cheap rents, the north-west of Stockholm is undergoing a revival. At its heart is Sundbyberg, (locals call it 'Sumpan') a colourful neighbourhood that is beginning to shine in its own right. The headquarters of a major bank has just moved in, alongside an improve commuter rail link, meaning that Sundbyberg is now less that ten minutes from Stockholm's central station.

Get off the train or tram here and you'll be greeted by an innovative area where the gorgeous red-brick buildings echoing its industrial history have been lovingly restored into bars, restaurants and boutique stores that give Sundbyberg a new lease of life. Once a lamp factory, Signal Fabriken is now home to the local library and a shopping arcade. Just up the hill, you’ll also find Delibruket Flatbread, a delightful pizza restaurant in a former water tower.

READ ALSO: The best Stockholm areas according to AirBnB users

The best coffee spots can be found on the main square or on the high street: try Princess Konditoriet for a traditional Swedish fika, and Matilde Deli for Italian patisserie.  There's food for the mind meanwhile at Marabouparken, a thought-provoking gallery showcasing contemporary Swedish artists.

Just a bridge away from Södermalm is the recently re-designed 'lake town' area of Hammarby, which is no longer only famous for its football team. Re-constructed with award-winning architecture and a shiny new tram line, this area is becoming much more than a place to grab an apartment with a waterside view.

The boats that line Hammarby Sjöstad's marina are now joined by a host of Stockholm-staple restaurants, including Hemma Hos Kaj, which serves Swedish cuisine in a traditional pub-style setting. On a warm summer day, there’s always a crowd on Thai Boat, a restaurant/bar moored opposite Hammarby marina that makes tropical cocktails as well as a mean pad thai.

READ ALSO: Ten Stockholm streets you have to walk down

Around the corner you’ll find a local microbrewery, Nya Carnegie Bryggeriet, that serves up their craft beers in 20cl samples (freshest on a Wednesday). Across the canal is Nobelberget, an industrial-turned-cultural space that hosts various alternative arts events from international music to late-night vintage faires.