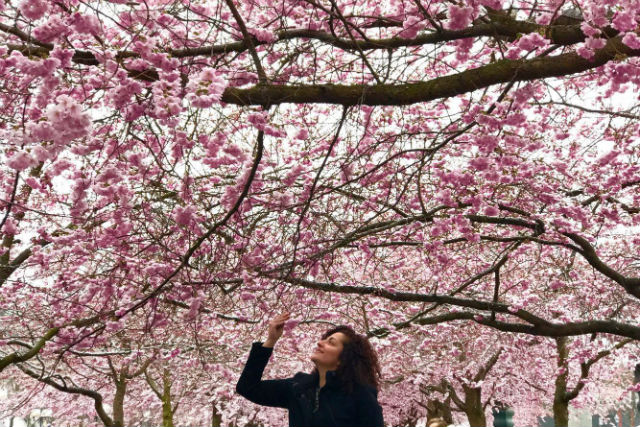 Maral on Kungstädgården in Stockholm.

“I always admired Sweden when it came to human rights, it was always very equal. Stockholm has always been a place I've looked up to,” Maral told SI News when asked about her decision to move to Sweden to study over 11 years ago.

After she finished her master’s at KTH, she worked for the university for a couple of years before pursuing a career in Digital Marketing. Since March 2017, she has been working as the Head of Marketing and Communications at Swedish energy management company Watty.

Watty’s aim is to fight climate change and create a more sustainable society. The office is based in Stockholm and is made up of 20 people who are dedicated to making tools that help people find out the energy they use in their home from an app that runs in real time.

“The mission is that we talk about climate change everything thinks its transportation or industry whereas 20 percent of the carbon waste actually comes from houses and buildings. We don’t know what we are doing with energy in our homes because the only way we find out is the energy bill that we get once a month or every three months,” says Maral.

Not only is she working to help consumers and citizens make a ‘greener’ world, since 2013 she has also been a co-founder of Peppy Pals, a company developing fun and educational apps and books that nurture the Social & Emotional Intelligence of children aged 2-8 years old.

If she doesn’t sound busy enough, Maral is also the Co-organizer and Moderator of FemTech at SUP46, a Silicon Valley-founded startup hub which helps teams quickly developing their businesses. SUP46 also focuses on enhancing the number of women in tech by giving support and offering a diverse range of opportunities.

“We bring in the community and different people to praise our heroes, anyone from founders/community builders/any good representatives for the ecosystem,” says Maral enthusiastically about the startup hub.

FemTech was launched in 2012 to reach students who are interested in feminist-technology and -science research. “We have four events a year,” explains Maral, adding they “bring in women from different backgrounds, highlighting positive stories of why you should be a woman in tech”.

It’s Maral’s entrepreneurial spirit that led to her current job at Watty.

While working at STING, an accelerator and incubator in Stockholm, she was snapped up by founder Hjalmar Nilsonne who offered her a job. Her passion for both the product and Sweden shine through when she explains that Stockholm is by far the best place in the world for an innovative product like this to grow.

“When the founder had the idea, he was in London, but he flew back because Stockholm has the smartest meters already in place, so it was simpler to start it here.” Swedes, she says, are “hungry for technologies and innovations so it’s the best place to start a business like ours”.

However, Stockholm is just the starting point for Watty.

If the product gains popularity here in Sweden, it will be adopted all over the world. Indeed, on their website everyone, regardless the locations, can subscribe to receive newsletters about when the Watty team will be able to install its energy saving tool outside the Swedish capital.

If this happens it will not only be “a dream come true” for Maral and the Watty team, but consumers could also become more aware of their spending and their personal impact on the environment.