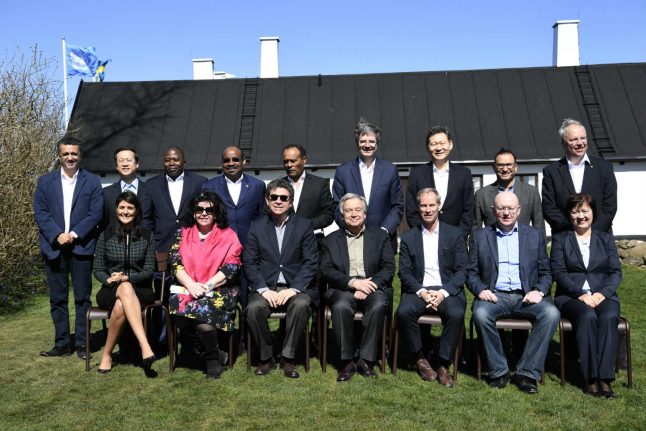 Day two of talks at the farmhouse, which was the summer residence of Swedish former UN secretary-general Dag Hammarskjöld, is set to be quieter than Saturday, with media not permitted access to the location.

Saturday’s more general discussions of the UN’s peacekeeping work and the role of current secretary-general António Guterres will be followed on Sunday by talks on specific situations in a number of countries, particularly Syria.

No decision is expected, but the hope is that this informal meeting – and the unique environment – will lead to openings that can give tangible results later.

Sweden’s foreign minister Margot Wallström has repeatedly stated that no major breakthroughs should be expected at Backåkra.

“There is hope. The Security Council can be effective when we agree on things,” Guterres said prior to the start of the talks.

He added that agreement must be reached over two issues with regard to Syria.

“Firstly, there is no military solution, only a political one. It is through political discussion that we can make progress. Secondly, we must find a way to investigate and find responsibility for the crimes that have been committed,” Guterres said according to news agency TT.

The start of the meetings on Friday and Saturday has been described as “relaxed”.

“Travelling in this way is like being on an adventure together, it creates a different mood,” Guterres said.

In a first for the council, which normally holds its annual brainstorming session in upstate New York, the 15 ambassadors and Secretary-General Guterres have this year been invited to hold its informal meeting in Backåkra by Sweden, a non-permanent member of the body.