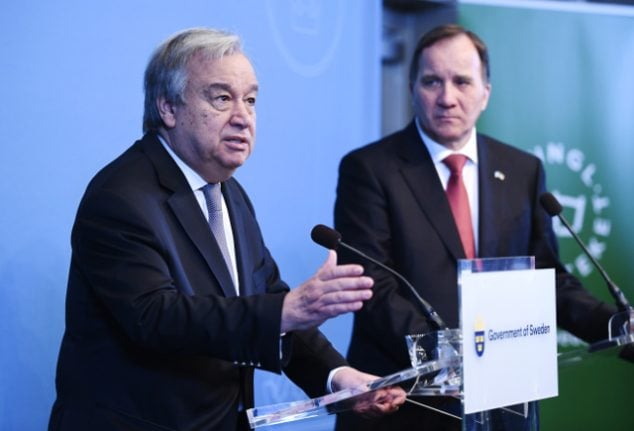 The two leaders met at the National Library of Sweden in Stockholm on Monday to discuss matters such as reforming the UN, the UN's work on refugee flow, and the conflict in Syria.

“Sweden has been consistently a bridge-builder in its action on the Security Council. In a world in which we have seen tension – I believe we can even talk of the resumption of the Cold War in many of its aspects – Sweden has fully abided by the values of human rights, the need to make sure that international law is respected, and at the same time tried to reduce tensions, bringing together different actors in the international scenario,” Guterres said in a joint media conference with Löfven.

MORE FROM THE UN SECURITY COUNCIL'S RETREAT IN SWEDEN: The UN Secretary-General emphasized that he believes there is no military solution to the Syria conflict, and that there needs to be access for humanitarian aid to reach the Syrian people and accountability for chemical weapons attacks.

PM Löfven agreed that multilateral efforts are necessary to resolve the situation in Syria:

“No nation can solve all these problems and challenges alone and this why Sweden and the European Union supports a strong multilateral system with the United Nations at its anchor.”

“But of course the United Nations need to be strong, efficient and accountable to meet today's challenges, and that is why we have also talked about the need for reforms,” he added.

When it comes to refugees, Guterres praised Sweden for being “absolutely exemplary” and said Europe had failed to provide support by taking coordinated action to ensure equal distribution in the area.

“If we want to have migration and asylum properly working in our world we need international cooperation, solidarity, and all countries need to assume their responsibilities. I hope discussions taking place at the United Nations will allow for things to move in that direction, and for a comprehensive approach,” the UN leader added.

Löfven said the situation Sweden faced in the autumn of 2015 was “not sustainable” and that shared responsibility is vital moving forward.'