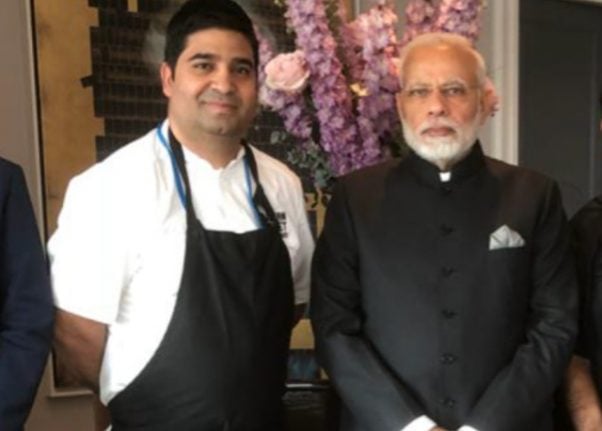 Modi's visit to Stockholm earlier in April was the first by an Indian PM in almost 30 years. The chef given the daunting task of preparing food for the two days was Dheeraj Singh, the Indian entrepreneur behind Stockholm's Indian Street Food restaurants and food trucks.

“We had built up some trust from 2015 when I was invited by the Indian embassy in Stockholm to cook for President Pranab Mukherjee on his state visit, as well as for the Swedish royal family and ministers there,” Singh explained.

“We do a lot of events in the embassy and we're well known in the Indian community in Sweden because we're some of the only Indians in the restaurant and catering business here – the others are often people from Bangladesh. Eventually when the visit of not only Prime Minsiter Modi but his whole team was being planned – where food is an important factor – I was asked to cook for them.”

The chef and his team cooked an incredible 220 vegetarian and vegan dishes for four different events during the visit: dinner on the night of Prime Minister Modi's arrival, followed by breakfast, lunch, and a meal for meetings later on the second day. Some of the food served to PM Modi. Photo: Indian Street Food

Though there was a lot to organize, the Indian PM's open mind towards food helped preparations:

“Prime Minister Modi is not a very picky person, he's very down to earth and an average vegetarian in his eating. He likes to taste lots of differing things. So the menu was agreed accordingly with the Indian embassy.”

“When I was serving Mr Modi he asked 'what are the other people eating?'. There was catering for other delegates and security as well. So Mr Modi wanted to try what the security were eating too.” Singh, who is from small northern Indian town Manali and owns a family restaurant there, was scouted and brought to Sweden to open Indian restaurants in Stockholm 14 years ago. In 2014 he decided to branch out on his own and launched the Indian Street Food trucks, which proved popular and soon led to restaurants.

The best review he may ever get came from no less than India and Sweden's leaders.

“So I explained it's a delicious carrot cake we do with cardamom, roasted milk and rose petals. Then Mr Modi said 'if you want to enjoy more of this, you should visit him!'. That was amazing, it can't get any better. That was the stamp of approval that we did well.”

MORE FROM INDIAN ENTREPRENEURS IN SWEDEN: