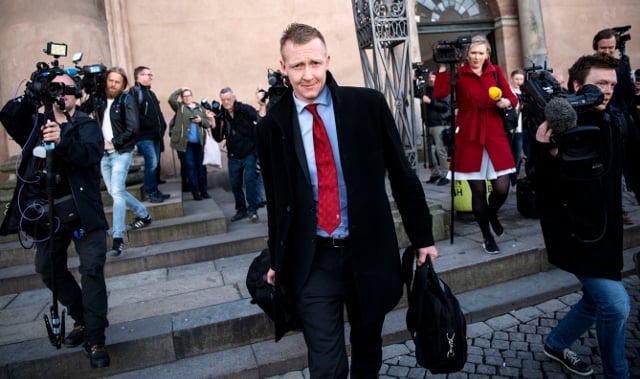 The decision by one professional judge and two jurors is expected at 1pm, after 11 days of hearings.

Madsen, 47 – who is accused of premeditated murder, aggravated sexual assault and desecrating a corpse – has repeatedly changed his version of events since his arrest last August, a day after freelance journalist Wall boarded his submarine to interview the eccentric self-taught engineer.

He has since admitted dismembering Wall's body and throwing her remains into the sea, an offence punishable by six months in prison, but denies killing her.

Madsen, however, said the freelancer died in an accident when the air pressure suddenly dropped and toxic fumes filled his vessel.

“I'm really, really sorry for what happened,” he told the court after the two sides presented their closing arguments on Monday.

‘A psychopath, but a loving one'

Described by psychiatrists as a “perverse polymorph” with “psychopathic traits” who runs a “high risk” of being a repeat offender, Madsen is a semi-celebrity in Denmark known for his ambitious development of rockets and amateur space travel.

He described himself to friends as “a psychopath, but a loving one”.

One witness called by the defence told the court he was a “kind, empathic, passionate man who was ready to listen”.

But Buch-Jepsen wrapped up his case by urging the court to use “common sense” and convict Madsen of premeditated murder.

“It's been shown by the psychiatric evaluation which says the accused is a pathological liar” and “a danger to others”.

“He'll do it again,” the psychiatric evaluation concluded.

Throughout the trial, Madsen's defence team has rejected the witness testimony presented by the prosecution.

And defence lawyer Betina Hald Engmark has seized on the lack of tangible evidence proving her client's guilt.

“The prosecution has presented a very interesting story … but one devoid of any facts,” she stressed in her closing arguments.

Wall's remains were retrieved from waters off Copenhagen in the weeks following her death.

The autopsy concluded she probably died of suffocation or a slit throat after she was sexually abused, but could not confirm the exact cause of death.

The coroner also found blood accumulation in her body that suggested her injuries were sustained while she was still alive, as well as a drop of her blood on Madsen's clothes, which would indicate that her blood splattered – which only occurs before death.

Fourteen stab wounds and piercings were observed in and around her genital area.

The court was also shown videos and animated films found on the hard drive of Madsen's computer, in which women were impaled, hanged and decapitated.

“It is not of a sexual nature. This is about strong emotions. I watch these videos to cry and to feel emotions,” he told the court.

Last year Madsen initially claimed he had dropped Wall off on dry land in Copenhagen on the night of August 10th, 2017, but he later changed his story, claiming that a heavy hatch door had fallen on her head and killed her.

When the autopsy later revealed there was no blunt trauma to Wall's skull, he said she died after a sudden drop in pressure caused toxic fumes to fill the vessel while he was up on deck.

He has admitted cutting off the journalist's head, arms and legs, and stuffing the body parts into plastic bags weighed down with metal pipes before throwing them into the sea.

To support the charge of premeditated murder, the prosecution said Madsen had brought along a number of unnecessary objects on board a submarine, including a saw, plastic luggage strips and a very long, sharpened screwdriver.

It also noted that on the night before Wall boarded his vessel, he googled “beheaded girl agony”, which Madsen said was a “pure coincidence”.

In addition to the life sentence, the prosecution has also called for safe custody, a legal alternative which would keep him behind bars indefinitely as long as he is deemed dangerous.