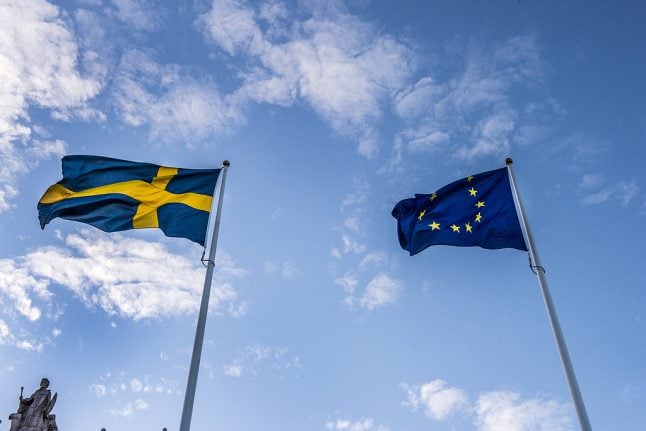 Swedish faith in the EU has strengthened. Photo: Lars Pehrson/SvD/TT

Each year Gothenburg University's SOM Institute carries out its national SOM Survey, questioning Swedes about their views on politics, society, the media, the economy and more. The results of the 2017 survey are now in. Here are some of the key points that emerged from the answers provided by over 30,000 Swedes on the state of their nation.

Though not quite jumping for joy on the matter, Swedes are growing more positive about the Swedish economy. Asked how it has changed in the last 12 months, 29 percent said it has improved (up from 12 percent in 2016), while 14 percent said it had worsened (down from 35 percent).

MORE FROM THE LOCAL ON THE SWEDISH ECONOMY: Dwindling police numbers and shaky performances in international school rankings have painted a bleak picture of Sweden's public institutions in recent years, but the results of the new SOM survey suggest attitudes towards them are becoming more positive.

The percentage of people who said they have a great deal or quite a lot of faith in how the police do their work for example is now 58 percent, up from 52 percent in 2016 (though not quite as high as the last decade's peak of 62 percent in 2014).

Schools are also bouncing back in public opinion, with 48 percent showing a great deal or quite a lot of faith in them, the highest since the 1990s and up from 42 percent last year. Some particularly fascinating shifts can be seen in how Swedish views on politics are changing. Swedes remain generally satisfied with democracy in the country (76 percent said they are quite or very much satisfied with it, up from 71 percent in 2016 and 69 percent in 2015). The position they believe they can be placed in within that democracy is however changing.

FOR MEMBERS: Understanding the Swedish election through ABBA songs The changing political landscape also carries over to opinions on the media, where faith is splitting further depending on age. On the one hand, youngsters are less trusting, with 44 percent in the 16-29 age bracket showing high confidence in TV and Radio (down from 58 percent in 2000), and on the other, the elderly are strengthening in their faith, with 66 percent showing high confidence in TV and Radio (up from 61 percent in 2000).

Overall, public service broadcasters still have the greatest amount of faith from the public by a significant margin. SVT registered over 70 percent high confidence from the public (down from just below 80 in 2016), while Sveriges Radio charted just over 70 percent (down from around 75 percent in 2016). At the opposite end of the scale is Aftonbladet, in which only around 20 percent have high confidence. While Britian prepares to leave the European Union, Swedish opinions on the EU are moving in the opposite direction, with 53 percent saying they're generally for Swedish membership in the union (up from 49 percent in 2016 and matching the all-time high of 2010). At the same time the proportion of people generally against EU membership dropped to 18 percent, down from 23 percent in 2016 and the lowest ever registered in the surveys.

MORE ON SWEDEN AND THE EUROPEAN UNION:

Swedish PM outlines his vision for the EU