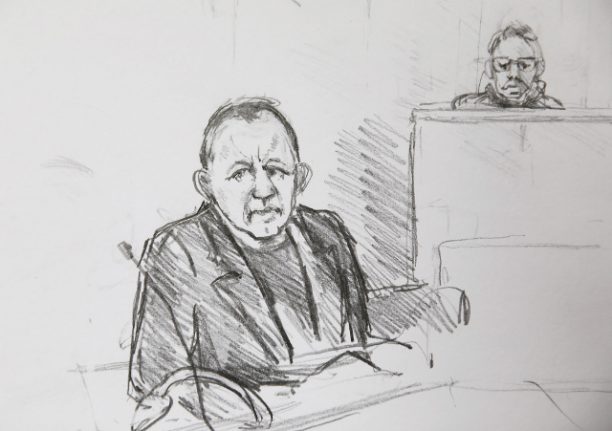 A courtroom sketch of Peter Madsen during the trial. Photo: Anne Gyrithe Sch'tt

But he still managed a fleeting smile of greeting for his gruff-voiced defence lawyer Betina Hald Engmark.

With no further need to scrutinise the evidence that had been piled up in thick A4 books around him on the other 11 days of his trial for the murder of the Swedish journalist Kim Wall, he no longer wore his thick black-rimmed glasses.

And he rubbed his eyes and slightly pale face, as if still recovering from a near-sleepless night.

MORE ON THE PETER MADSEN TRIAL: After he sat down, Madsen at first spoke briefly and seriously with Hald Engmark, but then sat in silence waiting for the judge and jury to arrive.

He was markedly more subdued than on other days, when his eyes often scanned the courtroom, taking in its ornate classical stucco, modern reliefs showing anguished figures, and chandelier lit with the light flooding in through high domed windows from a central courtyard.

The area reserved for the media and public was so overcrowded that some journalists struggled to find a decent seat, and chairs were passed forward from the back so they could squeeze into a place with a good vantage point.

Wall's mother and father, who had followed the trial on many of the other days from seats reserved for the victim's family, were not present in the courtroom. The family seats were instead filled with friends and relatives, several with a clear resemblance to Wall. They chatted quietly, catching up with each other as cousins do at a wedding or funeral.

When Judge Anette Burkø arrived in the courtroom, everyone stood up, following Danish court tradition, and she immediately began reading the unanimous verdict, handing down an unusually strong life-sentence while onlookers were still standing.

Most journalists had expected the sentence to come towards the end of the judge's address, when they would already be sitting down with their laptops open ready to file.

There was a sense of frustration as they struggled to find ways to communicate the news to editors and producers. Some pulled out their phones, others balanced laptops in the air.

After the verdict had been delivered Madsen's demeanour underwent a dramatic change. He appeared totally crushed and when the court was allowed to sit, he sat stock still, head bowed and eyes closed for perhaps half a minute as he absorbed it.

The forensic psychiatrist who examined Madsen had identified narcissistic traits, so perhaps he had still been holding onto a hope that the judge and two jurors would be swayed by Engmark's well-put together final arguments, which emphasised the absence of conclusive physical evidence in the case.

If he had been holding onto such a hope, it was demolished the moment Burkø began her address.

After the verdict was delivered, Madsen was led out of the court with Engmark to a back room where they could discuss their response. Minutes later they returned and Engmark announced that Madsen would appeal. By this time Madsen recovered his composure somewhat, and began again to move and look around.

Then the judge and jury left the court, after which Madsen was led away by a police officer, followed by Engmark.

After the trial was over, several members of Wall's family shook hands with one another, perhaps less out of celebration than a sense of completion.