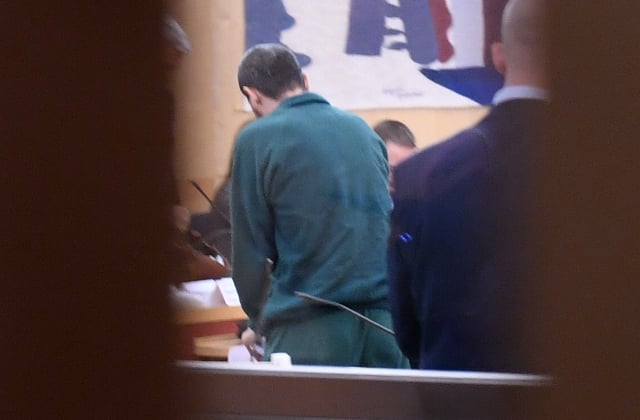 Akilov, 40, had sworn allegiance to Isis on the eve of his assault that killed five people and injured ten others in one of Europe's safest cities, though the jihadist group never claimed responsibility.

The Local was in the courtroom as prosecutor Hans Ihrman began his closing remarks on Thursday.

“Any other punishment than life imprisonment is excluded,” he told the court.

“Akilov is a danger to society and will be so in the future as long as he has the same beliefs that he has today,” Ihrman said, arguing the accused planned his assault “against infidels” in Sweden for months.

Akilov has expressed no remorse for his actions throughout the trial.

Ihrman added that Akilov was at risk of reoffending. A life term in Sweden averages 16 years. The longest term a person has served in the Nordic nation is 34 years.

Defence lawyer Johan Eriksson is expected to contest the life sentence when he presents his closing arguments next week. A verdict is due by mid-June, possibly earlier.

On the afternoon of Friday, April 7th, 2017, Akilov stole a beer delivery truck and barrelled down a bustling pedestrian shopping street, swerving wildly to hit as many people as possible before smashing into the facade of a department store.

Akilov, born in 1978, was arrested in Märsta north of Stockholm hours later thanks to public transport video surveillance footage, and confessed.

Having arrived in Sweden four years ago, he went underground after his application for Swedish residency was rejected in 2016.

Akilov's wife and four children had stayed behind in Uzbekistan.

Prosecutors have argued that he acted alone, even though he chatted with unidentified contacts on social media about his plans as far back as January 2017.

When his trial opened in February, Akilov told the court that he wanted “Sweden to end its participation in the fight against the caliphate, to stop sending its soldiers to war zones”.

Sweden, which introduced laws on terrorist crimes in 2003, has experienced only one other Islamist terror attack in modern times.

In December 2010, a man blew himself up in a suicide attack in central Stockholm that lightly injured two passersby.

FOR MEMBERS: Sweden's security police alerted to potential terror plans every other day