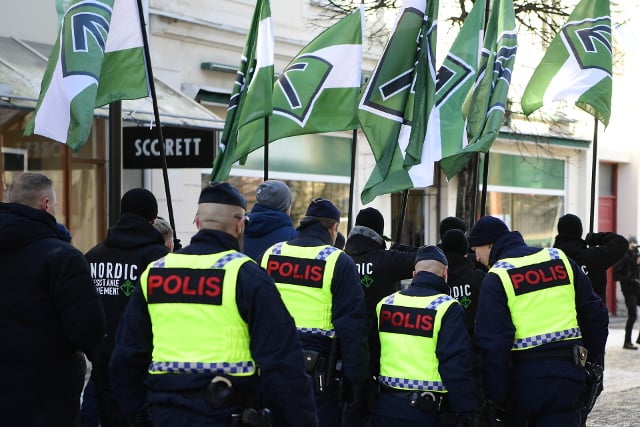 In 2017, 3,660 instances of neo-Nazi activity were documented by Expo (up from 3,064 in 2016 and a new record) meaning groups carried out an average of 10 instances of activity per day across the Nordic country.

Like last year the Nordic Resistance Movement (NRM) is still the dominant force, but others are also participating, Expo researcher Jonathan Leman told The Local:

“There are also other groups within the area. Some focus on spreading propaganda online, through podcasts, memes and so on. Others arrange concerts.”

MORE ON NEO-NAZI GROUPS IN SWEDEN: “At the end of last year 'Det Fria Sverige' (The Free Sweden) was launched. That is led by people previously active in the Party of the Swedes, which shut down in 2015, as well as people who come from the online environment surrounding the Sweden Democrats, but who in recent years have been radicalized and joined this environment of racist ideologies,” he continued.

“The NMR has condemned the group and accused it of splitting the movement. What we can see so far is DFS is getting new people into the environment, coming from the Sweden Democrats online following.”

The most-common form of activity remains propaganda spreading, for example in the form of handing out flyers or putting up stickers. But other activity can also be seen.

“We can see an increase in combat training activities – in other words martial arts training, training with knives and physical training –  from last year,” Leman explained.

Sweden's security police Säpo points out that an increase in activity does not necessarily mean an increased threat however.

“It's important to keep in mind that increased visibility is not the same as an increased threat, even if several crimes are committed in connection with public activity. Also this environment's activities go in waves over time, driving forces vary, and that results in different kinds of activities,” Säpo press secretary Dag Enander explained when asked by Expo about the actions of neo-Nazi groups in Sweden.

Earlier this year Nordic Resistance Movement leader Simon Lindberg was convicted for inciting racial hatred over a speech he held at a Stockholm rally that turned violent.

More recently the group took credit for an incident at the US embassy in Sweden's capital, where fireworks were thrown and a man was arrested suspected of attempted assault.