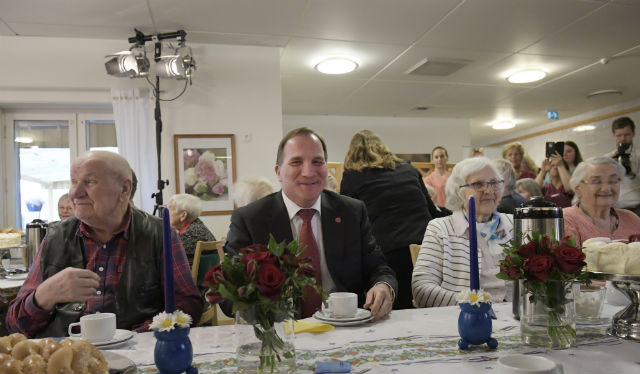 Prime Minister Stefan Löfven announced the boost at an old age people's home. Photo: Janerik Henriksson/TT
Prime Minister Stefan Löfven made the announcement during a visit to an old age people’s home in Södertälje, outside Stockholm.
“It shouldn’t only be worth your while to work, it should be worth your while to have worked too,” he said. “That’s why we want to raise the pension for the ordinary people who built this country.”
In a press release, the party said that around 1.2 million pensioners would benefit from the raise, which will be brought in if the party remains in power after September.
Those currently receiving a pension of between 11,000 and 14,000 kronor a month, mainly people who worked full-time in “ordinary jobs” like lorry driving, nursing or in kindergartens, will each get 600 kronor ($68) extra a month, the party said. Six out of ten pensioners are expected to benefit.
Critics pointed to the fact that those with the absolutely smallest pensions were not getting a boost.
The move received backhanded support from Jonas Sjöstedt, leader of the Left Party.
“Great that Löfven wants to raise pensions,” he said. “Shame that his government has said no to exactly this time and time again when we’ve tried to raise the guaranteed pension in budget negotiations.”

And even the opposition Moderates gave it tentative support, with the party's economic spokesperson Elisabeth Svantesson saying the party supported an increase in pensions but had yet to decide on how much of a boost was necessary.
Linnea Hylén, international secretary of the Centre Party’s youth wing, dismissed the 600 kronor as inconsequential, however, tweeting “how much will that be after tax?”.
“If you were really serious about pensions, Sweden would considerably lower the tax on savings,” she added. “Our generation will have to save like hell.”