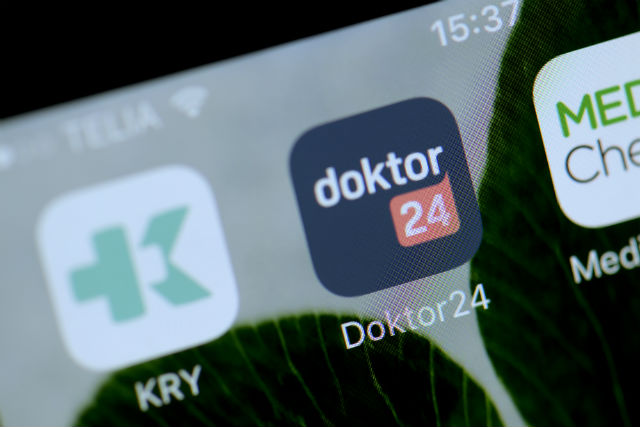 The doctor was working for Kry, an app, at the time of his arrest. Photo: Janerik Henriksson/TT
According to Swedish Radio, which first reported the results of the examination, it was a 'lesser examination' which will probably need to be confirmed by a more thorough assessment before sentencing.
Police suspect the man of 68 separate crimes against a total of 52 victims, including possession of child pornography and making children adopt sexual poses for him.
The 28-year-old was seized in December after he was reported for an alleged sexual assault carried out on a patient in Stockholm, but as police contacted the thousands of children he had treated, they identified scores of further victims at medical centres in Skövde, Skellefteå, and Jönköping.
Earlier this month, KRY, an app which allows people to consult with doctors online, also reported the man for carrying out 13 video examinations on children which it did not believe were medically motivated while he was working for them.
“When we became aware of this and seriousness of it, we decided to immediately dismiss this doctor from our service,” Samuel Danofsky, Kry's head of communications told Sweden's SVT broadcaster.
The man, who lives in Skaraborg County, denies the accusations, claiming that the physical examinations and photographs were all carried out and taken for bona fide medical purposes.
If the court agrees with the psychiatric assessment the man could be sentenced to treatment in a secure  facility for the mentally ill rather than face a long jail sentence.
Prosecutors must decide by Thursday whether to issue an indictment ahead of trial or to request an extension of the man's pre-trial detention.