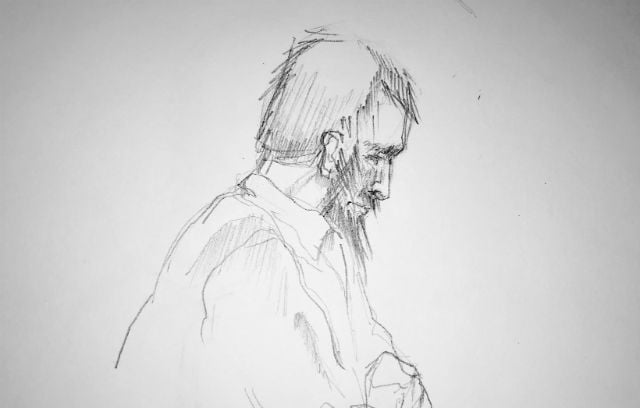 Rakhmat Akilov as he looked in court. Photo: Johan Hallnäs/TT
Rakhmat Akilov, an Uzbek citizen who had lost the right to live in Sweden, killed five people and injured more than a dozen when he drove a stolen lorry down Stockholm's busiest pedestrianized shopping street in April last year.
His two-month trial came to an end on Wednesday with the final arguments from defence lawyer Johan Eriksson.
“No one has beaten Rakhmat Akilov,” Eriksson pointed out.
“He has instead been treated by the Swedish justice system in a way which I judge to be admirable. The police have even lent him some TV series to  reduce the strain of pre-trial detention.”
Eriksson told this anecdote as an example of how Akilov's attack had failed to impact the rule of law in Sweden.
Even though Akilov himself believes he carried out a terror attack, Eriksson argued it should not be classed as one, as Sweden had not been terrorized.
“What the court should consider is whether the act truly damaged Sweden,” Eriksson said. “The prosecutor pointed out how Stockholm's facilities were knocked out for a couple of hours. But what happened in Gothenburg, Malmö, Norrland? There are some holes in the prosecution's information here.”
READ ALSO: Prosecutors call for life in jail for truck attacker Akilov
Akilov confessed to carrying out the attack as soon as he was seized last April, but he does not want to receive a life sentence or to be deported to Uzbekistan.
In his final address to the court, Akilov predicted that if he were to be returned to his home country, he would be dead within months.
“The first thing which is going to happen is that I will be sent straight to prison from the plane,” he said. “Within a few days, weeks, or at the very maximum, a few months, they will torture me to death.”
A judgement is due on June 7th.
READ ALSO: The Local's articles about the Stockholm attack