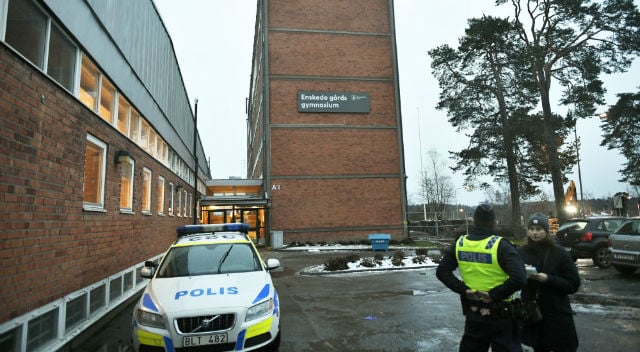 Police arrive at Enskede Gårds gymnasium in December. Photo: Vilhelm Stokstad/TT
Mahmoud Alizade had been an active campaigner in the sit-in protest against the deportation of child refugees from Afghanistan until he was stabbed by another pupil at Enskede gårds gymnasium school in December last year.
But more than four months after his death, he has still to be buried, as his mother, brother and sister, who live in Iran, have waited for a visa to attend the funeral.
“We have had the request denied, but we have appealed,” her lawyer Viktor Banke told TT newswire. “Her great wish is to be able to say farewell to her son.”
The trial of Alizade's 17-year-old alleged assailant began at Södertörn's Disctrict Court on Wednesday, with the court hearing that the boy had threatened to stab someone to death two months before the attack.
“I'm cut him,” he wrote in a message to a friend. “Then he's going to die.”
He stabbed Alizade several times, with three stabs hitting his back, according to the charges.
When the boy was arrested later, he was said to have been under the influence of drugs, hiding in the stairwell of a nearby apartment building.
The school has set up an indoor football cup in memory of Alizade, who was reportedly popular with other boys at the school and engaged in the fight for the rights of unaccompanied child asylum seekers.