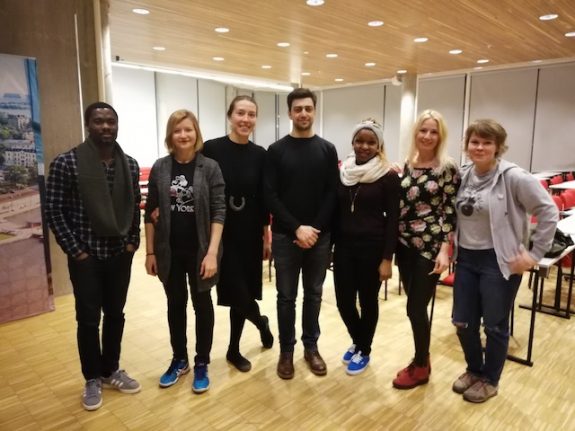 Sweden is one of the world’s most notable contributors to international development cooperation, particularly with developing nations. The country's contribution to advancing sustainable development through collaborative projects, funding, capacity building, grants and scholarships among other initiatives has placed Sweden on a pedestal for the world to see and learn from.

Of special interest is the symbiotic relationship that the country has been able to foster with developing countries.

The objective of Sweden’s cooperation with developing nations is to create opportunities for better living conditions for people living in poverty and oppression. The Swedish government believes that Sweden has a moral responsibility to support people living in oppression, vulnerability and poverty in various parts of the world as its way of giving back to the world.

How do they do it? Its development cooperation is channelled through collaboration in projects run by organizations such as the UN, the EU and its own government agencies: the Swedish International Development Cooperation Agency (SIDA) and the Swedish Institute (SI).

Benefits to the world

There are numerous benefits that developing nations receive from collaborations with Sweden.

Firstly, cooperation with Sweden inspires recipient countries to take ownership of their own development and create their own success stories based off of Swedish examples. Sweden, in the pre-industrial period, was considered one of the poorer countries in Europe. The country has since transformed itself into the seventeenth richest country in the world with a $49,678 GDP per Capita according to the Nordic Business Insider.

Sweden works closely with local governments in their partnering countries since Sweden itself is a devolved country. The country is committed to strengthening institutional capacity at the local government level and promotes multi/trans-disciplinary cooperation. This is of great value to developing countries which still struggle with establishing institutional mechanisms to drive development.

Sweden has a vast range of experience gained through its municipal development mechanisms and is thus a great choice for countries looking to cooperate. The SymbioCity-Kenya Platform is one such example where the Swedish Association of Local Authorities and Regions (SALAR) has collaborated with the Kenyan Council of Governors to carry out capacity building projects and workshops throughout the country.

Sweden's mixed economy is export-oriented with timber, hydropower and iron ore being the largest portion of its resource base. In addition to this, the engineering sector accounts for fifty percent of the total output and exports base. Pharmaceutical industries, telecommunications and the automotive industry also take up a significant share of the economy.

Developing countries are often rich in resources but face challenges in exploiting them to their full potential and in a sustainable manner. Swedish expertise in this regard is therefore of great value to both developed and developing countries. In order to reduce the margins of poverty in the world, it is increasingly important that developing countries make great economic strides in bridging the gap and cooperation with more developed countries is one of the ways of achieving this.

As the world continues to advance, there arise many humanitarian and ideological challenges that threaten global security and humanity in general.

Sweden is seen as the world's 'conscience' thanks to its reputation as the ”most equal country in the world” in regards to gender equality, ”one of the most progressive” in regards LGBT (lesbian, gay, bisexual, transgender) rights, and the most inclusive countries based on its consensus approach in decision making.

The ideologies adopted by Sweden make the world a better place and promote tolerance and kindness towards humankind. These positive aspects of Swedish culture are key to sustainable development. The more progressive and equal societies are, the higher the standard of development. It is evident that the world indeed benefits from cooperation with Sweden, but what are the benefits that Sweden receives in return from the other countries?

International trade is one of the most important benefits that Sweden gets from international development cooperation. A good example of this is in the trade relations of Sweden with India. Sweden and India concluded a treaty for the avoidance of double taxation and prevention of tax evasion in 1997, which was amended on October 1, 2013.

The two countries enjoy a bilateral investment treaty for the promotion and protection of investments since 2000. According to the most recent statistics, Swedish exports of goods to India amounted to 10,053 million Swedish kronor in the first eleven months of 2015, which represents an increase of 6.6 percent compared to the same period in 2014. This makes India one of Sweden’s most important markets for the export of goods.

The Independent, a UK based newspaper, published an article in October 2016 titled How immigration is fuelling Sweden`s economic boom. The article stated that in the last five years, Sweden has witnessed its biggest economic boom thanks to immigrants who have taken on jobs within the country, increased consumer spending and increased the profits of the housing market. It further stated that the move to take in asylum seekers from Syria, Afghanistan and Iraq saw the country's economy expand by 4.5 percent in the fourth quarter of 2015 (Witton, 2016).

Of course, this has also come with a new set of social challenges and it would be interesting to see how Sweden will address the situation and turn it into yet another success story.

Helena Balthammar, Coordinator of International Affairs at the Östergötland County Administrative Board, shed light on the value of international cooperation in an interview for the Swedish Institute. She explained that the value is reflected in the way Swedish organisations are able to grow as a result of their activities abroad.

“It’s inspiring to see how staff skills grow and develop through work on international projects,’ Balthammar says. ‘There’s a constant flow of new knowledge and knowhow from other countries, and we can reap the benefits. It’s good to have tools that help us in this respect.”

Swedish collaboration with the other countries improves Sweden's understanding of the world's people. It is natural for people to form preconceived misconceptions about others when there is minimal exposure.

Through collaborations, travel opportunities and an influx of diverse people to Sweden; the Swedish perspective of the world is improved. The Swedish Institute, a public agency, was in fact established to gain knowledge and understanding of different cultures, their people, and to promote Sweden and Swedish issues globally. These goals can only be established through collaboration with others.

Lastly, international development cooperation provides a promising future for Sweden. Long lasting cordial and beneficial relations with developing countries provide a bright future for Sweden as it ensures a long-term exchange of trade, labour, students for its universities, new markets and so on. Sweden's position in the world is cemented by its relations with its partnering countries as no country in the world can flourish as an island.

In conclusion, Swedish international development cooperation has more mutual benefits than challenges. Sweden should take the opportunity presented in international cooperation to promote an increasingly bright future for the nation. In the same way, developing countries should be open to cooperate with Sweden in order to reap the benefits of the vast experiences and knowledge that the country has to offer.