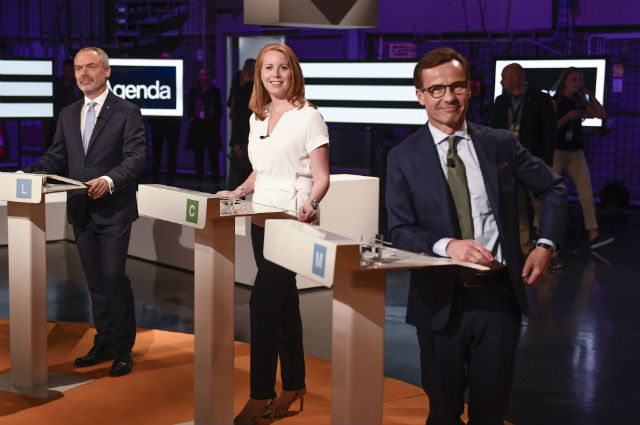 Ulf Kristersson at the start of Sunday's leaders' debate on SVT. Photo: Pontus Lundahl/TT
Party leader Ulf Kristersson told the Dagens Nyheter newspaper that it was important that all parties in the Swedish parliament could contribute.
“I don't intend to shut out any parties,” he said. “Let everyone who wants to discuss this take part in the conversation.”
Kristersson's willingness to invite the Sweden Democrats into cross-party talks marks an important moment for the populist party, long a pariah in Swedish politics because of its historic neo-Nazi links.
The Sweden Democrats are expected to increase their vote share significantly in September, leaving the Moderate Party a difficult decision over to what extent it would be willing to form a government with the party's passive or active support.
“This is a completely reasonable proposal,” the Sweden Democrats' party leader Jimmie Åkesson told DN after the invitation. “Talking more is crucial.”
FOR MEMBERS: Just how 'far right' are the Sweden Democrats?
Kristersson's comments came after the first party leaders' debate in the run-up to this September's election, in which he agreed with Prime Minister Stefan Löfven on the need for a cross-party agreement on immigration.
“I am prepared to stretch out a hand in this and say 'let's get together and sit ourselves down and create a broad parliamentary agreement on a better refugee policy,'” Kristersson said, adding that political disagreement had “paralysed” Swedish migration politics.
After the debate, Löfven said that he also supported the idea of a cross-party deal.
“Yes, I think so. We owe it to the Swedish people to be able to show that we can have a long-term sustainable migration policy,” he said, but rejected Kristersson's proposal to bring the Sweden Democrats into the talks.
“SD is not on the table. They don't actually want to stand up for the right to claim asylum. That says it all,” he said. “But otherwise, I think that it [the agreement] should be as broad as possible, because then it will be more stable.”
FOR MEMBERS: Could the Sweden Democrats leave Sweden ungovernable after the election?
Åkesson was seen by viewers as the best performer in Sunday's leader's debate, according to an opinion poll carried out for Swedish broadcaster SVT by Novus, an opinion research firm.
According to the poll, Åkesson came out top on two of the four policy areas covered, Migration and Law and Order. Ulf Kristersson performed second best, coming top in the voters' poll on Jobs and Welfare.
The Green Party's Isabella Lövin came out top on the Environment. Stefan Löfven was seen by viewers as the weakest performer, coming in third place in Jobs and Welfare, the issues where his Social Democrat party is traditionally strongest.