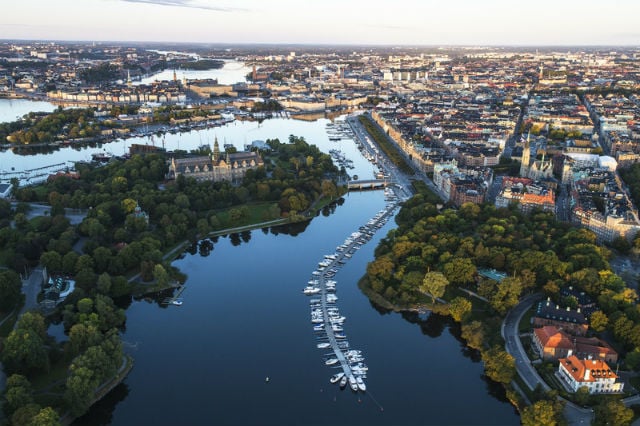 Stockholmers are worried. The city they love has been invaded by cranes, scaffolding, and rubble.

Throughout the inner city and suburbs, construction companies have cordoned off large areas where new buildings will soon stand. Locals fear the green space they cherish is under threat and, worse, the city’s unique character will be homogenised and forgotten.

Meanwhile, existing apartment blocks burst at the seams as more and more people flood in.

In a city with a population of over a million but with still around just 470,000 dwellings (many of which are occupied by single people), can Stockholm cope? Or will it crumble under pressure to accommodate for its swelling population, becoming unrecognisable in the process?

Absolutely not, says Stockholm’s city historian Mats Hayen. In fact, with 140,000 new homes planned for completion by 2030, he believes Sweden’s capital may be poised to achieve global city status.

“We are on the brink of a fantastically interesting era,” he enthuses. “It’s never been so exciting to live in Stockholm as it is now.”

140,000 new homes will be built in Stockholm by 2030. Photo: Heléne Grynfarb/imagebank.sweden.se

Hayen’s conviction is justified. Despite the desperate lack of housing, Stockholm has resiliently flourished over the years. It’s now Europe’s fastest growing capital, an accolade it wasn’t quite prepared to claim.

It’s also the financial centre of Scandinavia and the second most prolific tech hub in the world. Its success in areas like gaming, financial tech, and smart manufacturing has cemented its reputation as a global contender.

But to sustain momentum, and to compete with cities like London, New York, and Paris, more manpower is required. And that manpower needs somewhere to live.

The influx of new Stockholmers is one impetus behind Bostadspotential i Stockholm (Housing potential in Stockholm), an ambitious building plan laid out by politicians in 2013. The 17-year project is centred around constructing 140,000 new apartments by 2030; 6,000 of which will be built each year in the 2010s, a figure set to rise to 8,000 by the 2020s.

Stockholm’s 14 boroughs will be densified, with between 5,000-25,000 new homes built in each area. When the project is complete, there will be an estimated 590,000 homes in the inner city and suburbs. To put that into perspective, from 2030 onwards every sixth home in Stockholm will have been built in the 2020s.

But housing alone isn’t enough to support a growing population, and so there are also plans to build around 350 new schools, 18 sports fields, 850 shops, 530 restaurants and cafes, 21 museums, 110 supermarkets, and six cinemas.

The metro too will be lengthened by 20 kilometres with the Blue Line extended to Barkarby and Nacka Centrum, and a new Yellow Line running from Odenplan to Arenastaden in Solna. Overall there will be 10 new stations, a necessary augmentation that will grant new and existing Stockholmers easier and less-crowded transport around the city.

Some might say it sounds almost like an entirely new city is being built. They’d be right.

“We are building a new Malmö inside Stockholm,” neatly sums up Torleif Falk, Stockholm’s city architect.

In a city already pressed for space, residents are unsurprisingly anxious about where all the new infrastructure will go. Stockholmers are protective of their green areas and care deeply about the city’s historic buildings.

“Lots of people are concerned,” says Henrik Nerlund, Director of Stockholm’s Skönhetsrådet, the city’s dedicated beauty council. “People believe Stockholm is already finished and are worried about how high-rises will affect the cityscape. We hear from the public often about whether nature and old buildings will be preserved.” Between Nerlund and 12 other experts, including four politicians, the beauty council is tasked with investigating every building project in Stockholm to ensure it doesn’t threaten the city’s distinctive style.

The 13-strong team has an official role in the planning process and is privy to every potential project in the city. While they don’t have the power to veto outright, their advice is often heeded and plans are altered in response.

Despite the assurance of having a dedicated beauty council in place, the public still fears that this mass construction spells disaster for their city.

“Lots of people email us with their concerns,” says Nerlund. “We inform them about how we work and what we do, and reassure them we can initiate action such as writing to the city council and making sure they know what the public is thinking.”

Worried locals could find solace in taking a deeper look into their city’s past. This isn’t the first time Stockholm has seen mass construction of this kind. It isn’t even the second. And both times the city has emerged stronger and better equipped to tackle the future.

Between 1750 and 1850, Stockholm was stagnating. Economically, socially, and demographically, the city teetered on the verge of ruin.

When Sweden began to develop from an agricultural to an industrial nation, Swedes from the surrounding countryside moved to Stockholm searching for work. From the 1880s, private contractors built apartments designed specifically for workers. By 1918, there were around 100,000 homes in the city.

A lull followed the first world war before construction ramped up again in the 1920s. Once again, Swedes began to move back into Stockholm and this time they were joined by a wave of European immigrants.

The political institutions controlled construction throughout this period with municipal building companies constructing whole areas around the cities. The suburbs were born in the 1930s and apartments for all levels of society, known as funkis, were first introduced.

It was during the second wave that many of Stockholm’s old buildings were torn down to build modern replacements. It’s a wound that’s still fresh and that drives much of the anxiety surrounding the present wave of growth.

“Many European cities were bombed during the war. We were never bombed but we effectively bombed our own city centre,” says Hayen.

Following a brief population dip in the 1970s, when many people moved either abroad or out of the inner city, construction slowed to a screeching halt, averaging at just over 1,000 new homes per year.

Since 1980 there has been a steady stream of new Stockholmers; the city is now the densest it has ever been and shows no signs of slowing down.

It’s taken around 30 years, but construction has once again picked up to the same pace as the 1930s.

“If we say ‘stop now’ we will stagnate again and the pressure will be placed on other cities in the Mälardalen region,” warns Hayen. “But if we carry on and do it well, this could be a very positive point in Stockholm’s history.”

Building from the outside in

There is one key difference between this present wave of construction and Stockholm’s two previous growth spurts. Whilst in the past, Stockholm expanded outwards, this present wave focuses on building within existing space and effectively padding out what the second wave began.

Throughout the first two waves, there was still plenty of land to build on, but this time city planners and architects must be savvier with the space at hand. Falk explains that all new projects are being built within existing space while politicians have reassured the public that the parks and green areas will be left unharmed.

“Balancing building with maintaining the green space, which is one of Stockholm’s best qualities, is the biggest challenge,” he says.

Certain areas, too, have been identified for special attention.

Skärholmen is one area that has been singled out for improvement. Photo: Creative Commons

For example, Skärholmen, a suburb in the south-west of Stockholm with a large immigrant population, is one such area singled out for improvement. Social sustainability is an important part of the project and the aim is to turn the area into somewhere residents can be proud of and that other Stockholmers would want to visit.

“Nice apartments were built in these areas during the second wave, but the surrounding area is not so good. This time we will build new parks and schools, the project is more socially focused,” says Falk.

There is also a strong focus on connecting different parts of the city to bring residents closer together. One such project, Hagastaden, connects Stockholm with Solna, a municipality north of the city centre.

“It’s really interesting because we are trying to connect socially weaker areas to areas with a stronger economy,” says Falk.

It’s all part of the wider plan to bring new and existing Stockholmers closer together, strengthening the city as a whole. It’s a move that Nerlund believes will finally transform Stockholm into the global city it is capable of becoming.

“A fast-growing city has a lot of problems to cope with, but it’s better than a shrinking city which has much bigger issues. Stockholm is a good city now that will be even better in the future.”