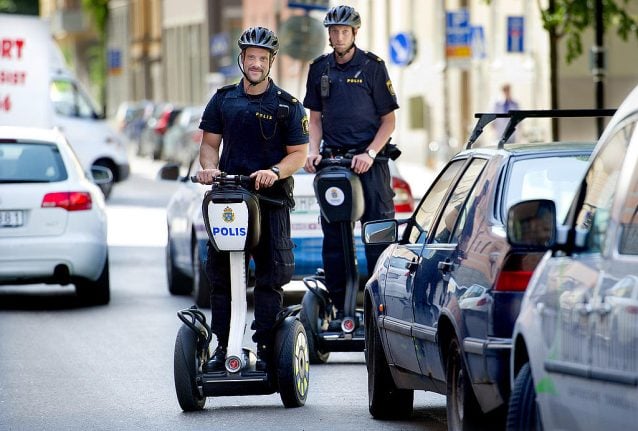 The segway police are a talking point for tourists. Photo: Erik Mårtensson/TT

Have you noticed the police officers in Stockholm are moving a little quicker than usual?

That might just be because you've seen them on their segways, which they've been riding for more than a year as part of a trial – which has been deemed a success.

Yes, the segways aren't going anywhere and the police are happy with what the vehicles have brought to the table. The vehicles gave the officers an added layer of visibility – not only can the officers survey a greater area, but potential thieves get scared away faster.

“It's like a little pedestal and we think it's great. The attention we get creates a kind of consciousness of our presence,” Peter Ågren of the Södermalm police said.

The segways, which are often seen in the tourist-rich Gamla Stan part of town, are a talking point for tourists too, many of whom stop to take a photo with the officers.

“I'm probably the only authority representing Sweden that these tourists will meet during their short stays, so I make sure it's a positive meeting,” said Ericson, pictured above.

But it's not just an awareness campaign either, officers said. Each segway holds a defibrillator, a fire hydrant, and a medical kit. And that's not all.

“I have toys and teddybears and things in there, in case I meet any kids. And I have dog food for any angry dogs. I've got it all in there,” Ericson added.