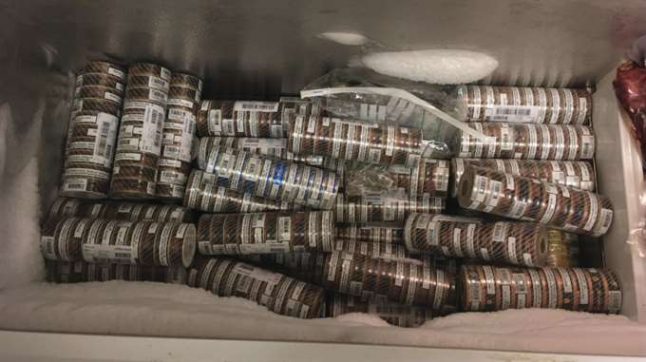 The employee is accused of stealing 14 pallets of snus cans. Photo: Polisens Förundersökning
According to a report by regional newspaper GT, the employee carried out the insider heist over the span of six months and the stolen snus is valued at 3.7 million kronor ($430,000, €360,000). Prosecutors say that the man sold the stolen cans for 20-30 kronor each.
The Swedish Match employee, who was not identified, is charged with stealing 14 pallets of snus between July 2017 and January 2018. Prosecutors say that the man stole the pallets and then took them to a secluded area in the company’s Gothenburg factory and loaded them into an accomplice’s lorry.
Surveillance footage caught the man in action and he has admitted to the theft. Police found nearly half a million kronor in cash in his home.
READ ALSO: Snus, the disgusting Swedish habit I just can't stand
Another man who is accused of driving the lorry loaded with stolen snus on eight occasions has denied his guilt.
Prosecutors allege that the two men were in on the plan together and split the profits of the stolen loot.
Snus, also known as Swedish snuff, is more popular than cigarettes in Sweden. Its sale is illegal across the EU but Sweden has been granted an exception and is allowed to sell the product within its borders. Swedes' affinity for snus can be off-putting to outsiders.
Swedish Match declined to comment on the case.
“We do not comment on individual employees, existing or former,” the company’s press spokesman, Johan Wredberg, wrote to GT.

While they confirmed the negotiations, first reported by The Wall Street Journal, both companies said there was no guarantee of a transaction. The Journal described the negotiations as “advanced talks” and said the deal could be valued at $15 billion or more.

Philip Morris, which sells cigarette brands such as Marlboro and Chesterfield in 180 markets outside the United States and has invested billions of dollars since 2008 in vapor products, oral nicotine and other “reduced-risk” products, said the talks were “in progress,” according to a statement.

“It is uncertain whether an offer will be made,” Philip Morris said. “PMI intends to make no further comment regarding the discussions unless and until it is appropriate to do so.”

Stockholm-based Swedish Match derives more than 65 percent of its revenue from smoke-free products, including chewing tobacco and nicotine pouches.

The companies noted “recent speculation” and confirmed that discussions with Philip Morris International regarding a possible public takeover offer for Swedish Match are ongoing, the statement said.

“There can be no certainty than an offer will be made, nor as to the terms of any such potential offer.”