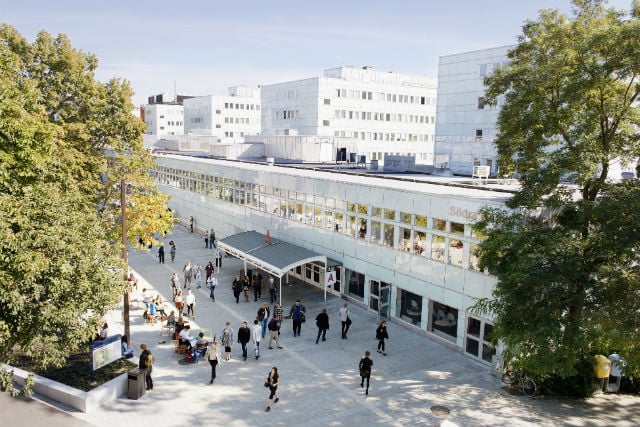 Professor of International Relations, Mark Rhinard had already done various three-year research stints in Europe before moving to Stockholm in 2005. It was, in fact, a result of meeting some Swedish researchers whilst working in the Netherlands that inspired the Californian to make the move. He embarked on his time in Sweden with the same temporary mindset as previous postings. Little did Mark know he’d still be here 14 years later.

“It turned out that I met a Swedish woman and I settled down here, got the job at Stockholm University and the rest is history,” he says.

It was a similar chance encounter that brought Professor Jenny White to Sweden.

After emigrating from Germany to the United States as a child, the social anthropologist went on student exchange to her native Germany. Failing to connect with any German students in her dormitory, she formed friendships with the Turkish students, eventually ending up in Turkey and specialising in Turkish studies. This is what led her to Sweden on sabbatical in 2014.

“This is how funny life is, it’s so contingent. I wouldn’t be in Sweden now if there had been one friendly German in the dormitory,” she jokes.

After she returned home to her post at Boston University she received a call from Stockholm University offering her a plum position as Professor of Turkish Studies.

“I really loved Stockholm. I’d never been here before and I just fell in love with the city. My colleagues were wonderful and I just felt really good,” she says.

The reality of the decision to uproot her life was however not as straightforward. It took her a couple of months to decide to make the move. “I was a tenured professor. It takes you years of struggling to get to that position. Do you really want to give that up?”

What made the decision even more difficult was the fact she had just bought and restored a property in the US after years of searching in a market she describes as similar to Stockholm’s, where apartments are highly sought after.

“It was really hard, but do you know in the end what did it? This was a called position,” she recalls fondly. “In the end, it was partly the fact that people seemed to really want me. I couldn’t possibly say no.

Take a look at top research from Stockholm University

The move to Sweden became clearer with time, she says.

“It had to do with this feeling that I could have a better life and focus more on my research and my writing which is really what I wanted to do.”

Mark recalls a slightly easier decision-making process when taking up his position.

“Stockholm University has a nice brand in the world, partly because of the excellent research taking place there and partly because of its location close to government, easily accessible and in one of the world’s most liveable cities.

Both Mark and Jenny have side projects which they say are complementary to their research and teaching roles at Stockholm University and vice versa.

Mark, who is also a Senior Policy Advisor at the European Policy Centre in Brussels, says he finds it a major advantage to have an outlet for his research.

“It’s a two-way street. You take your research findings and discuss them in practitioner circles in Brussels but the other side is that I get ideas for new research by talking to practitioners in Brussels so the positions are really complementary and serve to improve the quality and the timeliness of my research”.

Jenny occasionally takes a break from her academic research and writing to pen works of fiction and says this has had a beneficial flow on effect in her teaching.

“In fiction writing you end up going on tour to give readings which is completely different from doing a scholarly talk,” she says.

“You’re supposed to entertain them and initially I was very nervous about that and eventually I decided to let my inner clown come out and that has totally affected my teaching. Not that I clown around, but I’m so much more comfortable teaching now,” she adds.

Photo: Jenny White holds the Professors' Lecture at Stockholm City Hall at the Installation of professors at Stockholm University

When asked about their workplace, they both brim with pride.

“I’m very proud of the Institute for Turkish Studies. When I first came it was brand new and very small and now it’s become the go-to place in Sweden for information about Turkey. I occasionally consult with the US state department and soon I’m going to Geneva to a meeting for the Swiss military. This is one of the other reasons that I came, to be part of something that’s being developed, to help build it. It’s very exciting,” Jenny enthuses.

Mark is similarly enthusiastic about his role in starting the new international relations PhD programme at Stockholm University.

“It’s very exciting and timely and topically relevant. Running that has been really satisfying and rewarding. It’s the first of its kind in Sweden and it gives Stockholm University an additional international profile for attracting students and staff so it’s really a dynamic environment to work in right now” he says.

Both Mark and Jenny are in Sweden for the long haul.

“I’m not looking back at all. I found a really nice apartment, I have friends, there’s so much to do here and I’m much more productive than I was. I don’t feel constantly stressed, so I really am glad that I came. I think it’s good to shake up your life a little bit,” says Jenny.

Read more about White and Rhinard on Stockholm University’s website