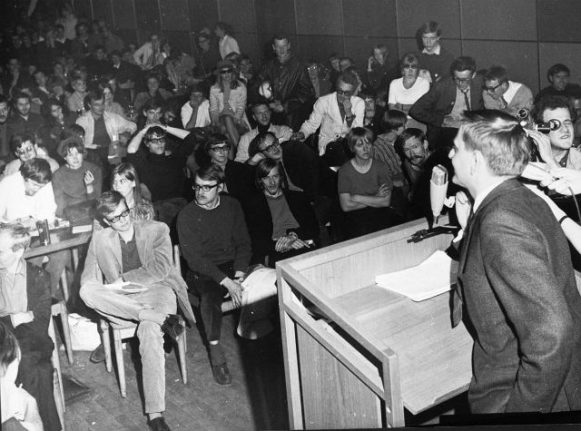 On May 24th, 1968, student protesters gathered to revolt against UKAS, the government’s reform proposal for a new curriculum.

The interest and enthusiasm of the young protesters – mostly left-wingers – was enhanced by other revolts happening around Europe. Just a few days earlier, students in Paris had organised a violent protest against the closure and threatened expulsion of several students at Nanterre.

The occupation came about as a result of a meeting, which was held in the Student Union to openly discuss UKAS, the aim of which was introducing a line system, or rather, fixed study courses in Swedish Higher Education.

After the governmental proposal, a wide range of critics and opposition groups had formed. More specifically, the opposition at the meeting included student politicians, but also affiliates of extremist movements (Clarté, KFML and the Left Youth Union), the so-called 68-left.

After just a few hours of discussion, the meeting took a wrong turn. Lively debates began taking place together with an increasing frustration among participants. They couldn’t reach a compromise, they couldn’t come up with an agreed solution on how to solve or address the new governmental curriculum.

Organizations from other political parties joined the discussion but left in favour of other more crucial issues than UKAS. As the meeting did not proceed to plan, the young protesters felt the only solution was to occupy the Kårhuset.

On the 25th, the event started gaining publicity as different newspapers began to cover the occupation. Even the former Education Minister Olof Palme intervened and tried to participate and mitigate the discussion.

His intervention was mainly regarding the importance of reformism and democracy. But just a day after the speech, in a radio interview, he criticized the “young communists” and tried to persuade them not to reject parliament’s decision.

Palme also told Swedish newspaper Dagens Nyheter: “those who led the meeting and those who sat in the speaker chair whilst I was there – were communists who would use this debate on student democracy and UKAS to express their disgust for democracy and to preface violent methods in the change of Swedish society”.

In the meanwhile, a demonstration train was organized by other opposition groups who aimed to occupy the Stockholm Opera, the Concert Hall and the Central Station. However, soon enough the attempt failed, and the train returned to the corps.

The climax came on May 27th; Kårhuset was closed and no-one was able to get in. The police even surrounded the Student Union and stopped bringing food to the participants.

Finally, after four days of demonstration, the starving protesters didn’t have a way out anymore. They came out of the building and thus ended the occupation.

The question is: was the four-day occupation worth it? UKAS was and continued to be a crucial educational policy battle for several years. The Stockholm University Union Council also changed its structure. If prior to the occupation the council had been dominated by right-leaning groups, after the event a new civilian party was formed, the Opposition ’68.

Therefore, 50 years later it is important to remember what happened at Kårhuset from May 24th to May 27th,1968. Despite the fact that protesters did not fully gain what they were asking for, they got a crucial role in the University Council, which without the occupation would have taken many more years for them to gain access to.