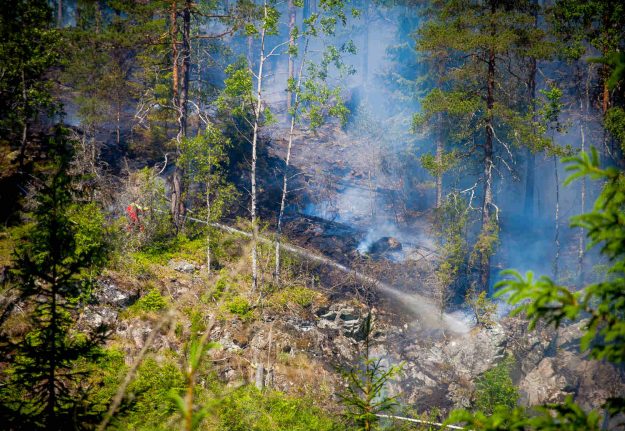 The Swedish Civil Contingencies Agency (MSB) has issued an official warning and rain is not forecast in the near future, according to meteorological institute SMHI.

Several forest fires are reported to have broken out during the last week in a number of different parts of the country, and SMHI considers 29 districts to currently be at risk.

A ban on starting fires is in place in areas including Stockholm, Uppsala, Gothenburg, Malmö, Gävleborg and Örebro.

MSB issued a warning on Friday due to the serious nature of the situation.

“There has been a number of fires in several areas but, so far, emergency services have control of the situation. But it is exceptionally dry at the moment and we are concerned that a fire could break out which we would find hard to control,” MSB head of department Jan Wisén told TT.

More dry weather is forecast for next week, according to SMHI meteorologist Jon Jörpeland.

Although southern Götaland may see localised showers and thunder during the weekend, it is difficult to say how much rain would fall, Jörpeland said.

“There could be quite heavy rain locally, but the dry weather will generally continue,” he said.

Many parts of Sweden have not seen rainfall since May 11th.

“Dry weather without rain is expected during the next week. So it will certainly be dry for the rest of May,” Jörpeland added.

Regardless of whether a ban is in place, MSB advises against open fires, barbecues, smoking and certain types of machinery in forest areas.

“In this situation, you should not use agricultural or forestry machines that risk giving off sparks. That is what started the fire in Västmanland County in 2014, when the weather conditions were similar to what we have now,” Wisén said.

“If you notice a fire it is extremely important to raise an alarm as quickly as possible. Forest fires in weather like this spread very quickly so it is incredibly important [for emergency services] to respond rapidly,” he said.