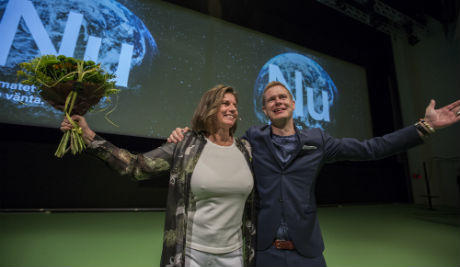 The green party's two leaders, Isabella Lovin (l) and Gustav Fridolin (r) on stage at the party congress in Västerås on Sunday. Photo: Peter Krüger/TT
The party's youth group had submitted a proposal to double the tax to Sunday's party congress in Västerås, with the backing of several MPs. But in the end the party voted for an unspecified increase.
Lorentz Tovatt, one MP pushing for a higher flight tax, told the Expressen newspaper that increasing the tax was necessary to cut emissions.
“We know that that the flight tax has already had an effect and at the same time we know that it needs to be raised to bring down emissions,” he said.
The tax, which came into effect on April 1, is the most visible achievement of the party’s first ever period in government, ruling in coalition with the Social Democrats.
It was set low, with all flights departing Swedish airports charged 60 SEK to 400 SEK per person, depending on the destination. But it has nonetheless been sharply criticised by the opposition Alliance bloc.
According to a poll for Dagens Nyheter, 53 percent of Swedes were in the favour of the new tax at the time it came in.
“This is an acceptable compromise,” said party spokesman Isabella Lövin, who had opposed a proposal to double the tax. “It’s good that we’re not tying ourselves down to an exact level.”
Tovatt told Expressen that families who could no longer afford a holiday in Thailand should instead consider taking the train to Europe.
“I don’t think we should describe Thailand as the absolutely most wonderful thing one can do,” he said. “There are alternatives. I think it should be easier to take the train down to Europe.”
The party has seen a dramatic decline in support from the near 10 percent it was polling at this stage before the 2014 election, to around four percent today, right on the threshold required to enter parliament.
But rather than move towards new voters, party activists at the conference voted through a raft of proposals designed to appeal to the faithful.
They voted to boost the right of refugees to bring members of their families to Sweden and to bring back automatic permanent residency rights to those granted asylum in Sweden.
They also voted to reduce working hours in Sweden, and to increase workers’ ability to decide their own working hours.
Gustav Fridolin, the other of the party’s two spokespeople, said that he hoped the increased flight tax would be used to help finance the night trains.
“We have fought hard to rescue night trains in Sweden and now we  propose that the Swedish Transport Administration should order night trains to Europe,” he said.
He said he was confident that his party would survive into the next parliament.
“Every gardening enthusiast in this country knows that dandelions [the party’s symbol] are damn hard to stop.”