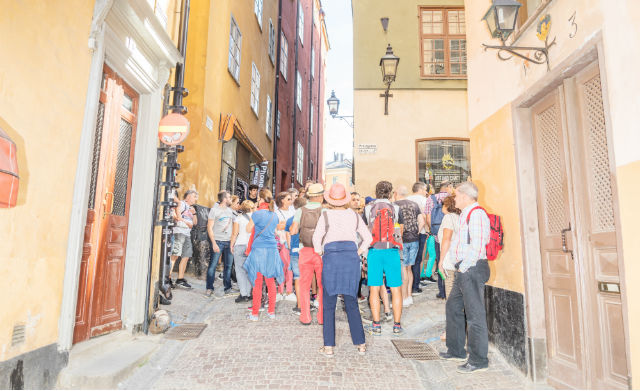 Tourists in Stockholm's Gamla Stan last summer. Photo: Adam Wrafter/SvD/TT
Ewa Lagerqvist, the agency's chief executive, told Sweden’s TT newswire that Germans, who frequently use cash at home, expect to be able to do so in Sweden as well.
“The Germans want to avoid the charges which banks take out on card payments, but they also cite deep-rooted privacy concerns when they consider why they want to be able to use cash,” she said. “For the Brits, it’s more purely the bank charges which annoy them.”
Tourists also complain that some payment systems only work with Swedish credit cards, excluding foreign consumers.
The complaint comes as Sweden’s Swish Payment system suffered a serious outage on Saturday, underlining the limits of a cash-free world for those who had been relying on the service for summer flea markets held across the country. The problem, which started at around 1pm, was resolved after a few hours.
More and more cafés, restaurants and bars in Sweden are going cash free, hoping to save staff time, reduce the risk of them pilfering from the till, and to stop violent robberies.
Mats Hedenström, head of retail politics at the Swedish Trade Federation, said businesses in Sweden should listen to the tourists.
“We’re talking about a big group of people with a lot of buying power,” he said. “So of course, it’s very important for us in the retail sector to get them to spend their money in Sweden.”
Despite the grumbling, tourists mainly spend their money by card on visits to Sweden.
According to Clemens Wantschura at the tourism industry trade group Visita, 90 percent of all payments made by tourists are by credit or debit card, more even than the roughly 80 percent of payments made by residents in Sweden.
Nonetheless, Wantschura said he expected that tourists would still be able to use cash in Sweden in ten years’ time.
“Yeah, I think so,” he said. “The question is whether you'll be able to get hold of any notes. Outside major settlements, that might be quite tough.”