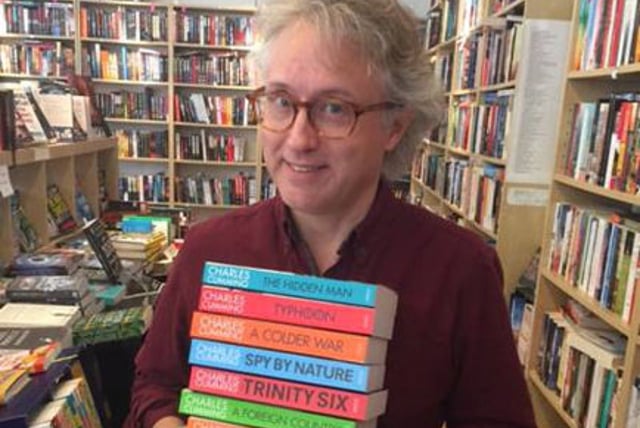 As the sun beats down on a buzzing Friday morning in the university town of Uppsala north of Stockholm, The Local steps into The English Bookshop, housed in one of the few old-town streets east of the river.

There we are greeted instantly by Smedh, almost like an outgoing professor: so clearly full of knowledge and eager to share it. He gives us a tour of a bookshop that is wall to wall with bookshelves and piles, but there is method to the madness. “We have around 13,000 titles, but every book is hand-picked,” says Smedh. Whether they were recommended it by a customer, publisher, or they found it at a book fair, “we could tell you something about all of these books”.

The biggest sections are crime, fiction and sci-fi/fantasy, the latter of which has a room all of its own. A leather armchair and lamp are nestled among the children's books – ranging from English translations of Swedish classics like Pippi Longstocking to Latin versions of Wimpy Kid and Harry Potter translated into Scots (apparently it's better than the original!). This is where they host story-time events for kids – “we clear away the tables and lay out pillows”.

These kind of events embody the spirit of The English Bookshop. “The idea is to be the most physical bookshop there is,” says Smedh. Meeting the authors, hearing stories come to life, or simply browsing their micro-categories (even three books on cycling get their own label) make book shopping here an experience that you can't buy online. The chances are that you will walk away with a book you didn't expect to buy, and those, according to Smedh, are the best customers.


One of many events inside the bookshop. Photo: Uppsala English Bookshop

So who are the regulars at The English Bookshop? “People would assume that most of my customers are expats, but 90 percent are Swedes who read for pleasure in English. Of all ages, from 13 to 92.” Over a cup of tea in a courtyard behind the shop, the same courtyard that receives weekly deliveries of half a ton of books from Essex, we discuss the mutual cultural admiration between Swedes and Brits. “Yes, we are anglophiles,” Smedh admits, but he does not see it as key to their success. “It's about a general love of the English language. We see ourselves as a country that is internationally minded.”

The wider success of The English Bookshop, however, is based on something that takes years of curation: knowledge and personal relationships with their customers. “We have always been a community bookshop,” says Smedh. “That's why we moved our Stockholm branch from Gamla Stan to SoFo, which has a bit more of a neighbourhood feel.”

Smedh himself is Uppsala born and bred. “I always try to get away, but here I am! I have lived in London, California… I tried to settle in Ireland, but I was just pulling pints at a local pub in Cork. I got married in the South Pacific. Now my whole life is within two blocks!” One of the huge weekly book deliveries.Photo: Uppsala English Bookshop

The way in which The English Bookshop builds a connection with its customers was a key reason for it being awarded bookstore of the year. Smedh ponders on what they have in common with the previous year's winners, the famous Shakespeare and Co in Paris: “Films have romanticized the experience [of going to a bookshop]… but that's part of what we try and do too.”

Smedh enthuses about the night they won at the London Book Fair in April as vividly as if it was just yesterday. “The awards ceremony was invite-only, but we had a table of ten or fifteen of my old colleagues from the UK there, rooting for us.” Theirs was the final award of the night. “I wasn't nervous though, by that time I just wanted it over with!” With the award. Photo: Elin Tizihssanne

He is quite modest about it, but The English Bookshop is a remarkable success story. Let alone international prizes, it is impressive to shift hundreds of books a week in an age of Amazon and e-books. Perhaps the Instagram generation have returned to physical bookshops partly for their aesthetic. “Yes, and what's more, books are about identity,” Smedh muses, “they say something about who you are”.

Nonetheless, what Smedh and his colleagues have created here in Uppsala is very special. As we take a walk around Uppsala, a local stops him to ask if The Local's reporter is an author he is taking on a tour of the town. When writers visit for an event at the bookshop, they normally stay at Smedh's home. “Bookshop owners are normally too timid to invite authors over, but it's great! They have breakfast with my family.”

It is this kind of personality behind The English Bookshop that makes it, for example, the only Uppsala store mentioned in the new edition of Lonely Planet Sweden. Smedh sums it up himself: “My philosophy in life is aggressive optimism – nobody is going to tell me something is impossible.”