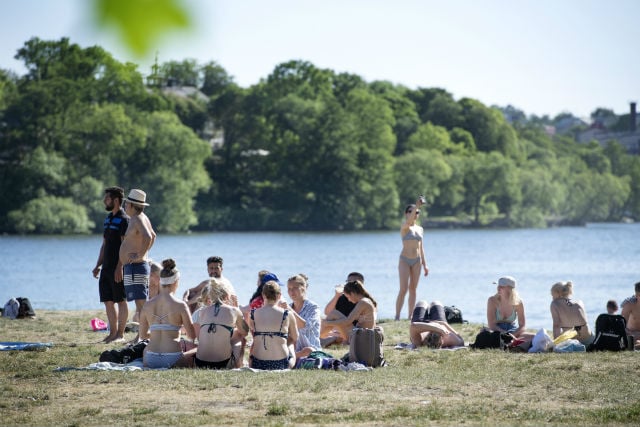 Taking a dip at Smedsuddsbadet in Stockholm. Photo: Jessica Gow/TT

And while the temperatures might not be high enough to make an Australian break a sweat, they were particularly unusual for the month of May in Sweden.

In fact, they were so unusual that they broke several records.

To put the heat into perspective, the graph below shows how much warmer the daily temperatures have been compared to the averages for May.

The eight maps of Sweden represent the past eight days, with the deepest red signifying 10C hotter than normal. Photo: SMHI

Wednesday was so hot that several cities and towns saw their warmest May day since records began 150 years ago. These included Gothenburg with 31.1C, Vinga with 26.7C, and Karlshamn with 29C.

Elsewhere in Sweden, Karlstad saw its hottest day since 1903, Malmö and Borås had their warmest since 1946, and Ulricehamn was the hottest since 1931.

And overnight temperatures were so warm they were almost classed as tropical.

In Bohuslän, for example, the lowest overnight temperature was 19.5C over Wednesday night. SMHI noted that if the temperature doesn't dip below 20C, it can be considered a “tropical night”, which it said was “very unusual” to have before mid-June.

And the month is ending with – you guessed it – another warm day. On Thursday, temperatures were in the high 20Cs in many parts of Sweden, with Gothenburg topping the tables with over 28C.

FOR MEMBERS: The top ten spots for a swim in Stockholm