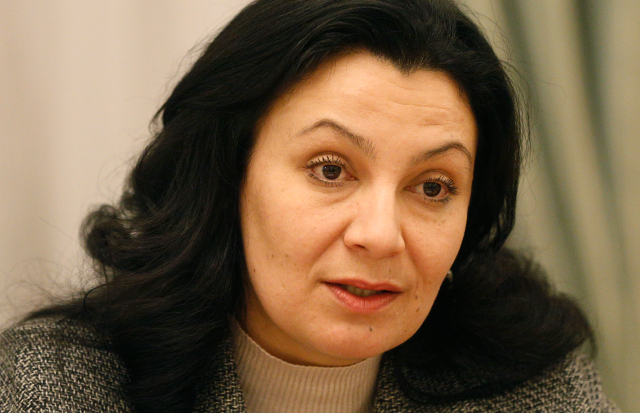 Ivanna Klympush-Tsintsadze, Vice Prime Minister for European and Euro-Atlantic Integration of Ukraine, attended the International Conference on Men and Equal Opportunities in Stockholm last month. The Local sat down with her for a short chat.

I tried to make the point that Sweden is implementing gender equality level 2.0 as opposed to other countries that are still trying to get to level 1.2. We are in the process of ambitious reform in Ukraine and believe that gender mainstreaming should be an important part of it, and we're trying to learn as much as possible from those who have done well. We already have quite a lot of programmes where Sweden is helping Ukraine in supporting gender reform and working against the discrimination of women.

Sweden has also announced plans to help train Ukrainian military not only in issues including handling ammunition and training soldiers, but also environment and gender, as part of Operation UNIFIER. It is interesting that traditionally “soft issues” are increasingly being brought to the top level.

Yes exactly, and I think it is extremely important. From a governmental level we are trying to do the top-bottom approach, but once you have the training on the ground from the bottom up, that will speed up the process and we appreciate that a lot. We have also been assessing how the situation has changed in terms of the role of women in the military and security and defence fields over these last years.

It could be surprising for many that the Revolution of Dignity and then the attack of the Russian Federation against Ukraine actually mobilized society as a whole and opened up the very special engagement that women bring to the table of defending the country. It started as women volunteers helping to provide necessary goods for the Armed Forces. Two years ago we opened up quite a few military professions for women and now we have almost 25,000 women serving in the Ukrainian Armed Forces, which is a big number. It used to be medics and cooks, but they are serving as artillerists, intelligence officers and so on, and that opens up a totally new perspective: how do men perceive women officers? It's probably a strange way to put it, but it is kind of a fast side effect that gives you a positive result. Sweden's “feminist foreign policy” has become an international talking point. We interviewed Sweden's Foreign Minister recently for the A Woman's Place podcast and she said that when she meets ministers from other countries they are always quite interested in hearing about it.

That's because we are finally able to provide substantial arguments. The IMF has been trying to figure out how the 50/50 engagement of women in the labour force changes the situation, and it turns out that irrespective of geography, culture and even the development of the country, if everyone is part of the labour force you can boost your GDP. So therefore all these economic arguments resonate not only with women, but also with men.

Sweden is a very good example for how you progress and benefit as a society and economy if you have equal opportunities for men and women. So therefore Sweden's feminist foreign policy has a very good basis that allows people to deeply think about the things that could be done in other parts of the world.

In our case we are very appreciative that Sweden not only has this policy but also provides us with a guiding hand. Because in Ukraine we have a pretty good general legislation on gender equality, but it used to be more declarative as opposed to having practical instruments to how to implement this. We are trying to translate it in practice, fighting stereotypes… it will require time, patience and work.

What's the gender equality situation like in Ukraine? You're a woman in a senior position, have you ever felt it was hard to get ahead?

I have also undergone my own transformation with regard to gender equality over the past four years after I was elected to parliament for the first time. I was totally against gender quotas for political parties, but then I realized that quotas probably are a way of making a serious jump ahead in order to ensure that equal opportunities become a tradition.

Now, don't be misled, I represent a government with gender equality priorities, but I am among three women out of 25 people on the government. Ukraine today has the highest number of women in parliament that it has ever had, but that is just 12 percent. So I think all of us who have made it this far take it as a very serious responsibility that we do not screw up, that we are professional, active, engaged enough so that we pave the way for others who come behind us.

I think unfortunately most of us in the country have had this or that negative experience because of being a woman. You still hear sexist language and stereotypes even in the political debate and that should not be acceptable. But finally we are raising our voices, not just women but also men, and that is a huge transformation we have not seen before.

How would you describe Ukraine's place in Europe today?

Tough. The major thing that defines our relation with Europe is our Association Agreement and Deep and Comprehensive Free Trade Agreement. For us this is a road map for a lot of changes and reforms we are doing in the country. For us it is also important that there will be political willingness from the EU to engage in the long term with Ukraine and see us as part of the European family, because we have never been anything other than Europeans.

Sweden and Ukraine have quite a long and historic relationship, perhaps longer than you would think. It is quite fascinating when you think about how far back we go.

Isn't it? The Ambassador (of Ukraine to Sweden) took me to the Armed Forces Museum in Stockholm, where you have an impressive collection of flags from the 16th and 17th century, including some flags from Ukraine from that period of time, which says a lot. As I said earlier, for us Ukrainians, we are making the effort right now to put ourselves back on the historical and cultural map of Europe. And when it comes to Sweden our relationship dates back to the Vikings – according to some myths they helped us establish Kyiv, the capital of Ukraine. People from Gammalsvenskby who emigrated to Sweden in 1929. Photo: Pressens Bild

Yes, but that was later. It's a small village in the south of Ukraine where there are still some families who speak old Swedish that came there in the 18th century. I think all of these ties are unexpected also for Ukrainians, because we were made to believe that we were part of the Soviet people and didn't have any national history. Our history was privatized by the Russian Empire and then the Soviet Empire, so it is important for us to tell the story to ourselves and tell the story to the world. It's an exciting road to explore together.

That could well be true. People in Ukraine are pretty mobile and at least what we are hearing from countries that have had big Ukrainian communities, for example Portugal, they have always praised the Ukrainians. But we hope very much that after they worked a bit or studied a bit they come back. We are trying to create these economic opportunities back home to enable them to do so. But that takes time and we understand it takes time.

The Local interviewed Ivanna Klympush-Tsintsadze at the Ukrainian embassy in Stockholm on May 15th. Interview shortened and edited for clarity.