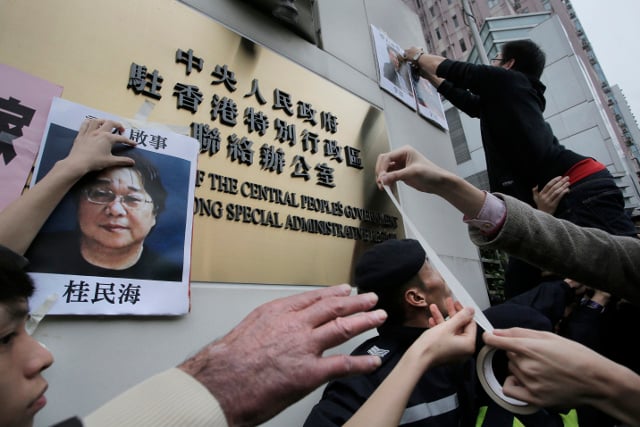 Gui, one of five Hong Kong-based booksellers known for publishing gossipy titles about Chinese political leaders, was arrested on a train to Beijing in January while travelling with two Swedish diplomats.

He was reportedly en route to see a Swedish specialist over fears he had the neurological disease ALS.

READ ALSO: Sweden and China in row over doctor's visit to Gui Minhai

It was signed by prominent Swedish academics, editors, journalists, politicians and actors.

“China is a superpower that has vast economic, political and cultural influence on the world. Its leaders in Beijing have made it clear they are ready to play a leading and responsible role in the world,” the article said.

“They often refer to their proud cultural history as an asset for China and the rest of the world. Their actions against Gui Minhai are in sharp contrast to the leaders' proud declarations.”

Gui first disappeared in 2015 and resurfaced in mainland China.

He was on holiday in Thailand at the time of his first arrest and eventually surfaced at an undisclosed location in China, confessing to involvement in a fatal traffic accident and smuggling illegal books into the mainland.

Chinese authorities declared they had released him in October 2017 but his daughter Angela Gui, 23, told AFP at the time that he was under “loose house arrest” in Ningbo.

After his second disappearance into police custody, Gui appeared in a video interview in February confessing to wrongdoing and accusing his adopted country Sweden of manipulating him like a “chess piece”.

It was unclear whether the Chinese-born Gui's statement was made under duress, but video of his confession showed him flanked by two police officers.

A close friend said the remarks were “not to be believed.”

The Chinese embassy in Sweden said in February that Gui was being held in a detention centre in the city.