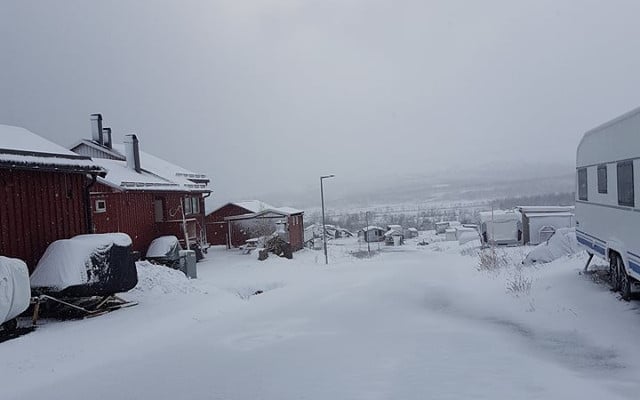 This year Sweden experienced its warmest May on record, with sun and prolonged dry spells across the country, but the glorious weather came to an abrupt end on Monday night.

In the south that meant temperatures in the mere teens; in the north it meant sudden snowfall, as captured by an employee of the Coop supermarket in Katterjåkk near the northern Swedish border.

“It has been very warm here too so we were convinced we wouldn't get more snow, but we did!” Lisa Isaksson told The Local.

READ ALSO: Sweden has hottest May on record

“It's normal to get snow here in June – sometimes we get snow here on Midsummer – what happened this time is it came so suddenly. I went to bed at about 11pm and woke up around 6am to a winter landscape.”

It's not just the quick change in weather that was unusual: the -6.8C temperature registered over the night at a weather station three hours south in Latnivaara is the coldest June temperature in Sweden since 1991.

Fortunately, the prognosis from national forecaster SMHI is that warmer air from the south (and warmer temperatures along with it) will arrive at the end of the week.