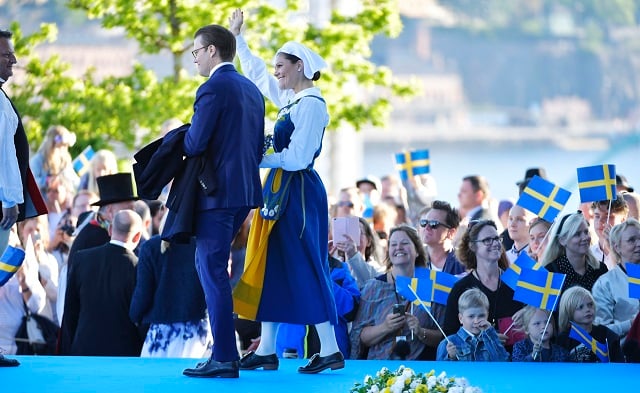 In the capital, open air museum Skansen is always a good bet for a sense of traditional Sweden — it was actually the first place in the country to host a National Day celebration, back in 1893. This year, the events start at 10am, with crafts for children and activities including stilts-walking and sack racing, concerts in the church, and folk dance displays. From 6pm, head to the Solliden stage for a concert featuring several Swedish artists, and you might even catch a glimpse of  the royal family, who will be there for the evening event. Can't make it there, or just feeling lazy? You can also watch the celebrations live on SVT from 8pm.

The Royal Palace has an opening ceremony at 10am, welcoming the public for a day of free entry to the castle's halls and exhibitions, as well as events for children who can dress up in costumes and crowns. You can also follow the Swedish royals' parade to Djurgården, which leaves the palace at 17.55 and passes through Slottsbacken, Skeppsbron, Norrbro, Strömgatan, Kungsträdgårdsgatan, Berzelii park, Strandvägen, Djurgårdsbron and Djurgårdsvägen.

For something a little different, head to Gärdet, which hosts a day of horse racing between 11.30 and 16.20, as well as awarding prizes to the guests who turn up wearing the best hat. There's also the opportunity to try out a whole range of other sports, including cricket, basketball, and beach volleyball.

In Södermalm, Stora Blecktornsparken has a family-focussed day of events including games and pony-riding between 12 and 6pm. And for any engaged couples, there's even a drop-in wedding ceremony at the lovely Vitabergsparken (you’ll need to bring ID and a marriage licence).

To the north, Hagaparken has musical and dance shows between 11 and 4pm if you want to spend the day in one of the city's most beautiful green spaces.

South of the city centre, the Årsta suburb is one of the best destinations for families. A local theatre group will perform scenes during a cultural walk through Årstafältet from 11, and from 1pm there will be a kite festival in the same location, accompanied with live music and poetry and lots of food and drink.

In Skarpnäck, the celebrations at Kulturhuset revolve around Sweden's five national minority groups, with dancing, games, and workshops from 11:30-6pm.

Meanwhile, over in Kungsholmen the Mosquito Beach Party at Rålambshovsparken always attracts a large crowd and is great if you want a more lively celebration from noon until late (9pm), with music, dancing, and flags from all around the world. Bring a picnic to enjoy on the beach! Stortorget will host a flag parade, folk and urban dancing, orchestra and choir performances throughout the day, as well as a craft market.

Those with children might want to check out Folkets Park between 12 and 3pm, where there will be a sing-along and circus performances.

The city's biggest park, Slottsskogen, is host to the biggest celebrations, held between 11am and 5pm. As well as the citizenship ceremony, there will be music from the Gothenburg Symphony Orchestra and crafts for children and adults.

For something a bit different from the usual choirs and flag-waving, Trädgårdsföreningen is hosting a one-day festival featuring The National, Future Islands, and other indie favourites. Tickets starting at 740 kronor are still available at the time of publication.

In the evening, there's an open air concert from the Gothenburg Wind Orchestra at Kronhusgården, starting at 6pm.

For a more rural day out south of the city, Askims Hembygdsförening has guided tours of its museum as well as traditional songs and refreshments.

Nääs Slott in Floda is hosting a 'children's day' between 9.30 and 4.30 pm, where little ones can meet some of their favourite TV characters as well as trying out circus skills and watching magic tricks and music. Unlike many events, this one has an entry fee, of 130 kronor in advance or 150 kronor at the door. Luleå: Head to the Hägnan Open-Air Museum in the Gammelstad Church Town, a UNESCO World Heritage Site, for traditional celebrations. The parade begins at 11:30 before the raising of the flag at midday. There will be speeches, musical and dance performances (including nyckelharpas, a traditional Swedish instrument), flowers and cakes for sale, and demonstrations of traditional crafts.

Sundsvall: In the city's historical centre, activities for all ages kick off at 10:30. There's a strong literary focus to the celebrations, with talks from several Swedish authors and poets, as well as a flea market and free face-painting for children.

Umeå: This year's celebrations are taking place in central Rådhustorget, where between 12 and 1pm the short and sweet programme will include singing and a ballet performance.

Karlstad: There's plenty going on in the lakeside city. Mariebergsskogen has child-focussed activities starting from 11am and traditional celebrations kick off in Sandgrundsparken at 2pm. Stick around until 4pm for a concert from Wermland Opera Orchestra.

Linköping: Gamla Linköping Open-Air Museum is the best place in this student city to mark June 6th, with a whole range of activities and shows from 11am onwards.

Östersund: Head to cultural museum Jamtli for a festive day and free entry to its exhibitions, with everything from drop-in wedding ceremonies and displays from local sport and performing arts groups to talks, including a lecture from a photographer whose work is currently being exhibited there and who will talk about his experience working with asylum seekers in Sweden.