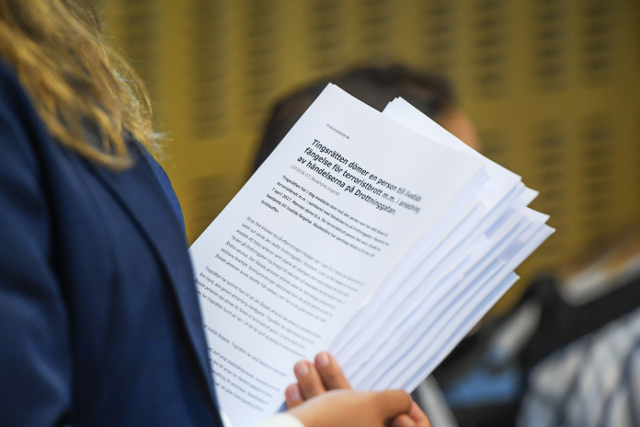 1. Akilov's attack did not entirely go to plan

In the ruling in the case, which The Local had access to, it is made clear that Akilov intended to cause even more damage than he managed to on April 7th, 2017.

The summary of events states that:

“Just before three o'clock on Friday April 7th, 2017 Rakhmat Akilov seized a truck and drove down Drottninggatan in Stockholm. In the process he killed five people, injured ten people and further directly endangered the lives of a large number of others. The drive down Drottninggatan took around 40 seconds and ended with Rakhmat Akilov crashing the lorry into the Åhléns warehouse. Rakhmat Akilov then ignited a home-made explosive device in the truck's cab, which did not however detonate in the way he had intended. He then fled from the scene.”

Akilov was subsequently arrested in Stockholm suburb Märsta on the evening of April 7th and has been in detention ever since.

2. More than 100 attempted terror crimes and the intent to 'kill as many as possible'

The court judged that through 119 cases of attempted murder, Akilov should also be sentenced for 119 attempted terrorist crimes. In a further 24 instances he was judged to have endangered others.

The court concluded that Akilov “clearly acted with the specific intent to kill as many as possible on Drottninggatan”. As many as a thousand people could have been impacted by the crime, according to the prosecutor.

3. One of the biggest cases in Swedish history

The initial proceedings in the mammoth trial lasted 24 days, while there were around 8,500 pages of material from the preliminary investigation. Around 138 plaintiffs were represented by 14 lawyers.

An immense amount of evidence was used, described by the court as “comprehensive”. It included a large amount of CCTV footage, photographs, material taken from the scene of the crime, witness testimonies and an animated reconstruction of the incident.

Akilov's mobile telephone was also analyzed and photographs, chat logs and web history were taken from it. Data from the phone's connection was also used to chart his movement before, during and after the crime.

The lengthy document detailing the ruling also broke the attack down into different zones, describing extensively what happened in each area.

While lawyers and experts appeared to generally agree with the outcome on Thursday, perhaps the one sticking point will be the subject of compensation. Legal representatives of the plaintiffs had asked for a total of 20.6 million kronor in compensation, and in the end the court settled on a total of around 13.9 million kronor.

The relatives of the five victims killed in the attack will not receive the 150,000 kronor additional infringement compensation they had demanded however, with the court judging that in order for that form of damages to be awarded the crime must be directed towards the person seeking them. Instead they will receive a standardized compensation of 60,000 kronor each.

5. No decision yet on an appeal

Akilov has the right to try to appeal Thursday's verdict. His defence said that no final decision has been made on whether that will happen, but that they will reach one “as soon as possible”.

Lawyer Johan Eriksson told the media in Stockholm that his client was “disappointed” to be sentenced to life imprisonment rather than a sentence for a specific number of years.