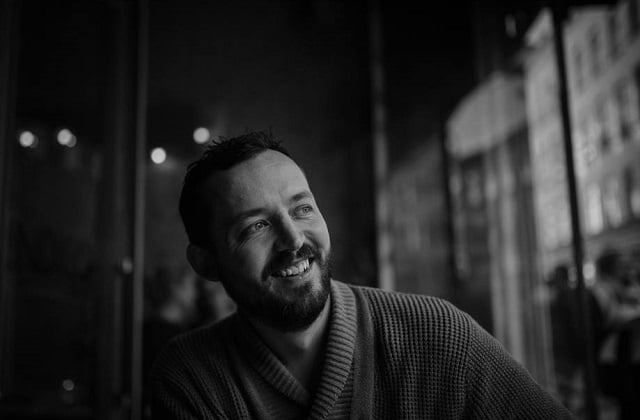 Photography entrepreneur Cole Roberts has been living in Gävle, Norrland since 2014, but his fascination with Scandinavia began ten years earlier. During a semester abroad in Helsinki, Roberts visited Stockholm and quickly fell in love with Sweden, choosing to return not long after for a one-year Master's degree, this time in Umeå in Sweden's far north.

His experience studying in Sweden led to two lasting relationships. Not only did he meet his Swedish wife, Therese, but he also met his current business partner, Jakob Granqvist, who was enrolled on the same university course in entrepreneurship.

Today, the pair run three businesses together: wedding photography company Nordica Photography, photography conference Way Up North, and Kolla, a photography art print store launched in March this year. Roberts had always been interested in starting a business, inspired by his parents who had both worked for themselves, but never anticipated a career in the wedding industry.

“It's actually slightly hilarious. Granqvist and I met as partying students — if you'd told us then where we'd be now, we would have laughed at both the idea of weddings and photography. Neither of those things was on our radar at all!” he tells The Local.

The pair developed an interest in taking photos separately, with Granqvist in Sweden and Roberts having moved back to Canada following their studies. At first, it was just a hobby, while Roberts struggled to find a job that challenged him. When Granqvist started a photography blog, the Canadian was inspired to set up his own as a way of gaining SEO skills. It was when he started to get inquiries about paid photography assignments through the blog that Roberts realized he could turn it into a job. “I don't have a formal artistic background at all… does playing professional hockey count?! I think education is never a bad thing, but learning by doing is always the best teacher,” he says.

When Granqvist also made the move to Vancouver, the pair brainstormed ways to start making money, and decided to go all-in on photography. That's how their wedding photography business, Nordica Photography, was born in 2009.

“We quit our jobs, and it was 100 percent about hustling out a living through the craft. We were in it together from day one and had to make Nordica work,” Roberts explained.

Since then, the friends have travelled the world to photograph destination weddings, a journey that has taken them to every continent but one (if you’re planning an Antarctica wedding, get in touch so they can complete the list!).

At that point, Roberts says he could have easily stayed in Vancouver and “lived happily ever after with a healthy business.”

The decision to move back to Sweden came when his first child was born. Living in Sweden made sense, both to be closer to his wife's family and to benefit from Sweden’s child-friendly policies.

This time, they ended up in Gävle, a small town at the very south of Norrland. Roberts says their choice of city was fairly random.

“We had no connection to the city other than it was the midpoint between Arlanda and my wife’s hometown, Söderhamn. My wife landed a great job with a large company in Gävle, we bought a home, and were off to the races,” he explains. “Canada is more like the Wild West for entrepreneurs: there are more people, and there’s more disposable income, so you just start doing something and see if it works. Sweden is more by the book, you really have to do things the right way or it will catch up with you later. But that’s no bad thing — if you can make it here with all the regulations, you can probably make it anywhere. It’s an exciting place,” he says.

“Weddings here are also typically done in a Swedish way. For photography, people don't pay what we charge, and you can't force your services onto the market, so that's why we do destination weddings.”

A lot of people travel to Sweden for elopements because of the spectacular landscapes or the possibility of a snow-covered backdrop, but Nordica Photography also travels regularly to Italy and France for weddings, and Iceland is the most popular country of all among their clients.

For his own wedding, Roberts and and his wife eloped within Vancouver and got married in a cave on a beach. The only person who knew about it was Granqvist, who also photographed the day.

“We've been the sole witnesses to many weddings, and people often tell us 'you can't post anything online yet, no-one knows we're doing it'!” he says.

So how does it feel to get that kind of insight into such an intimate moment?

“Well, the romantic answer would be to say that it's tearful and emotional, but actually we  approach every wedding the same, you have to detach yourself from the day a bit to make sure you're documenting the day in the best way and to tell the couple's story. That applies whatever the size and location of the wedding.”

Taking a practical approach to the job doesn't mean the two don't love what they do. “We never take it for granted how lucky we are,” Roberts stresses. “Due to travelling so much, we’re lucky enough to photograph various locations around the world outside the wedding itself.”

“The talent here is incredible; the work created by Swedes is world-class. However, you’d never know it in some cases because I don’t feel like self-promotion and seeking attention is a priority for the average artist here. Artists here are understated and modest which is comforting in a way,” explains Roberts.

The contacts they made through those conferences were a catalyst for the second project, Kolla. A selection of prints from Kolla. Photo: Kolla

The idea to curate and sell high quality photography prints came when Granqvist, wanted to decorate the walls of his summer cabin. When he looked for photography to display, the only options he could find were either extremely expensive options or generic, uninspiring photos.

“After starting several businesses, we've learned that it's important to have a North Star — a reason for why you do what you do,” says Roberts. “For Kolla, that 'why' statement is 'See the world differently'.”

The duo realized they could use their own archive of non-wedding work, as well as work from the global network of photographers they'd met at Way Up North, and curate it into a collection of photography art to sell at affordable prices.

It took about a year to take Kolla from a spark to a fully-fledged business, with the site launched in late March this year.

But the business has already been met with a great response. The pair launched an equity crowdfunding campaign through Swedish site FundedByMe — and reached their minimum goal in just four days.

“That’s just insane, to be honest, and the support for Kolla has exceeded our expectations. It seems like we’ve come at just the right time. Everyone is obsessed with Instagram now, constantly scrolling through these curated timelines of photos, but if you look at the average office space, they mostly have very mundane pictures on the wall. So why can’t we have the same quality and range that you can get online?” he notes.

“I hope this can inspire people that starting businesses is exciting. In Sweden, there’s no excuse not to do it if you have a good idea!”