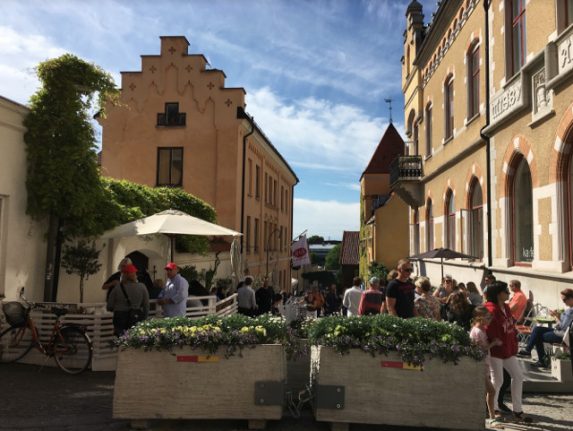 A month into our move to Gotland I noticed it everywhere. Everyone was bitten by it. It spread, almost like a fever and made me look quizzically every time I saw the afflicted.

As temperatures touched the late 20s, beach fronts, promenades, parks, and any patch of grass that got some sun was taken. Outdoor cafes were packed with revellers happily squinting at the sun. Thousands of people were baking under a sun that I was running away from.

'Isn't the weather lovely!', 'Hope you are enjoying the summer!' were comments I heard in person and in every email.

Yes, some bit of warmth feels good after a cold spring. But everyone around me seemed to be going overboard. And if I did sound like Scrooge on Christmas eve, I am not to blame. To a tropical islander like me, who has been born under the sun and sweated under it every single day, I could not comprehend what the brouhaha was about. Just for the record, the average daily temperature in my hometown Mumbai hovers around 30 degrees Celsius. And we don't feel so euphoric about it.

We are a people taught to seek shelter in shade. While I criss-crossed walkways just so that I can be in the shadows of buildings and trees, everyone else chose to voluntarily walk on the sunny side. No one even made a slight remark of how hot it had become, leave alone fussing about it. The nights were getting shorter and I was getting less sleep because the sun was up so early. While I enjoyed an extended day because I could do so much more, I could not bring myself to have dinner under a bright sun. Why did dinner have to feel like lunch time?

What I enjoyed about last summer were the festivities. We were being warmly invited to homes of strangers by friends we had just made. Midsommar (midsummer) was a riot. Barbecue evenings and day long picnics were par for the course, as was the traditional strawberry cream cake. To me, this could not have been a celebration of the weather alone. I was convinced it had more to do with the annual holidays after a hard year of work.

But as we know things change. And so do seasons. Three months into the sun-fest and the party was over. The sun was setting a few minutes earlier each day. Velvety petals of red roses hardened and lay crumpled on the walkway. The leaves were turning colour. It was officially autumn. The beaches were empty but for a few crazy swimmers, and parks no longer had people on every inch of available space.

Autumn, apart from Spring, is my favourite season. The apple and pear trees were lush with fruit. I did not have to wait till past nine to watch the sunset. The air was cold and yet the sun brought warmth.

I marvelled at the mature grace of autumn. But it was not a talking point for most. People on the street seemed to have a more purposeful look about them. They walked faster. They looked more focus. They smiled less. Almost as though they were preparing for what was to come. Nobody spoke about autumn parties or barbecue autumn evenings. The only comment I heard often was, 'Hope you have started your Vitamin D supplements!'

Then came November. It had been overcast for a week. The days were getting shorter and colder, as the sky grew darker. The parks were silent. So was the promenade. Everything around was gloomy. Everyone wanted to head home or stay in bed for longer. Coffee wasn't enough of a cure.

It was not yet winter but the blues had set in. 'This is the most depressing time of the year,' said a friend. She was convinced the most number of divorces take place in November. The grey was getting to me too. I read a lot about seasonal affective disorder and seasonal depression and how to beat the seasonal blues. I tried to practice some of it. At first, I forced myself to a jog in the dark. Then I bought a ticket to Mumbai to get some sun. I was back in a few weeks and the weather had gotten only marginally better. It was less grey than November, but it was getting dark by 3 pm. The evening run was the only cure. That, and fika with friends.

The respite came in the form of Christmas. This was the first time I was living in a town where it snowed, so expectedly I went overboard. I made snow angels just about everywhere and would scout out anyone game for a snow fight.

Yet, I longed for the sun. It is no fun going to work when it is dark. I counted the days to June and ritualistically checked how many minutes earlier the sun will rise in the coming day. Soon it would be spring. The birds were chirping again, the tulips bloomed and the cherry trees blossomed.

This year the summer has come earlier than usual. The days are exceptionally warm. Dinner still feels like lunch time. But I am not complaining. I sit out in the park during lunch. I walk on the sunny side of the street. Why, I have even soaked in the sun at the beach twice already. I have the sun on my face and a sunburnt nose.

But would I have it any other way? Definitely not!

Rupali Mehra moved to Sweden in the spring of 2017. She is a former television anchor & editor and now runs a communications consultancy. She can be reached at [email protected]