Allemansrätten (Right of public access) means it's possible to camp in the wild all over Sweden, but where are the best spots? We've picked seven of the finest.

Keep in mind that there are some rules that you must respect in Sweden in order to combine the enjoyment of outdoor activities with the respect of the flora and fauna. Other than that, enjoy:

Skuleskogen is one of 29 national parks in Sweden, situated in the Västernorrland county, on the coast of the Baltic Sea in northern Sweden. Umeå lies 130 kilometers away and Sundsvall around 120 kilometers, so it's close to two transport hubs. This park is home to one of the Swedish coast's few remaining old-growth forests, high mountains, rocky grounds and stunning views of the sea, lakes and woods.

There are plenty of designated spots to pitch your tent, but you can't stay more than three nights on the same one. There are also free cabins all over the park if it's raining.

How to get there: You can take a bus or train to Umeå and Sundsvall. From there there are several buses or train lines which will take you to one of the two entrances to the park (Docksta in the South, Näske in the North). More details can be found here.

The Upplandsleden is a 400-kilometer trail in the Uppland county. There you'll find fire pits, swimming areas along the inlets of Lake Mälaren in the south, and the Dalälven river archipelago in the north. This is a nice opportunity to explore Uppland and hike easily through forests and lakes. You can pitch your tent anywhere for 24 hours as long as you keep the “do not disturb, do not destroy” rule in mind.

How to get there: You must first choose which section you'd like to hike, ranging from six to 19 kilometers and varying from one to several days. Get a detailed map of each section here

Enjoy views over lakes and forests. Photo: Magnus Salgo/flickr.com
3. Fulufjället
The national park of Fulufjället is situated in Dalarna, close to the Norwegian border and about 25km west of Särna. The park is ideal for lovers of alpine experiences, wide open spaces and canyons. There's also Njuperskär, Sweden's highest waterfall. Three zones are available for wild camping, with the only condition being to keep your distance from the overnight cabins and take your garbage with you on your way back.

How to get there: There are many entrances, so first choose from the numerous trails. Note that there is no public transport from the nearest bus stop in Särna to Fulufjället.

Gotland is Sweden's largest island, and lies in the middle of the Baltic Sea on the southeastern coast. It is known among swedes as the perfect destination during summer, for its abundant flowers and birdlife, sand dunes, long beaches and the medieval city of Visby, on the UNESCO World heritage list since 1995. It's also the perfect place for a bike trip! Pitch your tent anywhere, keeping in mind to stay away from houses.

How to get there: By ferry from Nynäshamn to Visby, or by plane.

The nature reserve of Glaskogen is situated in the province of Värmland, between the municipalities of Årjäng and Arvika in southern Sweden. There you can enjoy 28,000 hectares of lakes and forests, along with an abundance of flora and fauna. Inside the park you can rent a kayak for 220 kronor a day ($25), or rent mountain bikes and fishing permits for 80 kronor a day. There are camping pitches, cottages and cabins all over the location. To stay overnight, you will have to buy the Glaskogen card (50 kronor a day), allowing you to use facilities such as fireplaces and rubbish bins.

How to get there: You can go by car or by bus from Karlstad, Arjäng or Arvika. The reserve is about three and half hours from Gothenburg by car and four and a half hours from Stockholm. 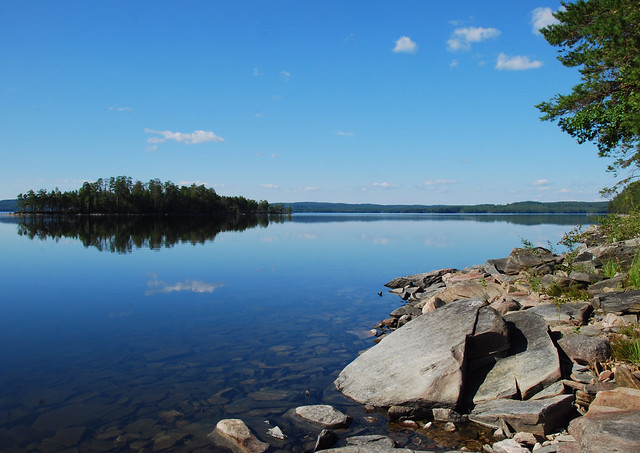 Glaskogen is nice for canoeing. Photo: Petra Links/Flickr.com
6. Skåne
The county of Skåne is situated at the southernmost point of Sweden, and is home to the cities of Malmö, Helsinborg and Lund. There you can hike the Skåneleden Trail, a 118 kilometre path that stretches all over the beautiful countryside, along the coast and country roads, on ridges, in beech and pine forests, and through white beaches. You will find many sites for wild camping, and shelters along the trail. Here are some suggestions for hikes.
How to get there: You can take a bus from Örkelljunga to Åsljunga. Once off the bus, you'll soon be on the trail. Kungsleden (The King's Trail) is a hiking trail in northern Sweden (Lapland), between Abisko in the north and Hemavan in the south, and is about 440km long.

It passes through Vindelfjällen Nature Reserve, one of the largest protected areas in Europe. You may even meet wild animals along the way, including reindeer, bears, small mammals and some birds.

The path was designed in the late nineteenth century to make the landscapes of Lapland accessible: large rivers, imposing mountains, birch forests, alpine heaths…You will have no problem finding a place to camp in such a place. Note that due to the weather the trail is considered practicable and ideal for camping from the beginning of June to the end of September.

How to get there: The most common places to start the trail are Abisko, Vakkotavare, Saltoluokta, Kvikkjokk, Ammarnäs and Hemavan. You can take the train, plane or bus to Abisko, Kiruna or Lulea according to your point of departure. See more details here.