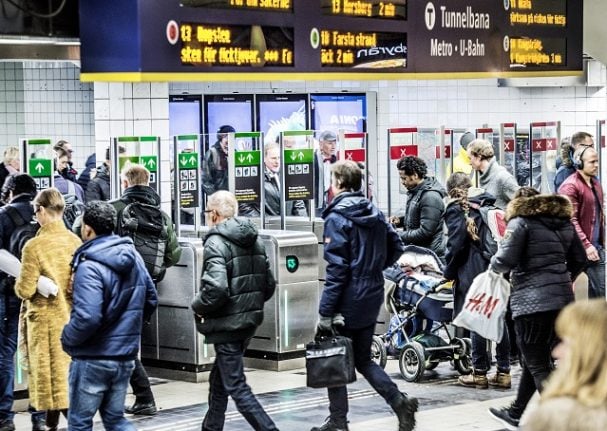 The regional train track (which is separate from the pendeltåg track) between Stockholm Central and Stockholm Södra is closed over summer due to planned renovations. Customers therefore need to travel from either Stockholm Södra or Flemingsberg on many regional routes going south from Stockholm.

In general, fjärrtåg (long-distance trains) will leave from Södra in Södermalm and regionaltåg (regional trains) will be departing from Flemingsberg further south in Huddinge, but there are a few exceptions.

Around 450,000 passengers are predicted to be affected through the entire summer period, and the two replacement stations will be much busier than usual. The stations should be clearly signposted with extra staff on hand to help direct you to your train.

In order to reach the stations, there are several options. The ordinary pendeltåg (commuter train) routes are not affected by this track closure, so you can travel to Södra or Flemingsberg from elsewhere in the city.

Stockholm Södra is within easy walking distance of Mariatorget on the red tunnelbana line and Medborgarplatsen on the green line is about a ten-minute walk away, while six bus routes (4, 74, 94, 55, 57, and 66) all stop close to the entrance.

To get to Flemingsberg, you can either travel to Stockholm Södra and then take the pendeltåg south, or you can take a combination of tunnelbana and bus (for example, it's possible to take the tunnelbana 19 to Hogdalen and change to bus 172).

Allow plenty of extra time to reach the right station and make sure you've looked up the best route in advance, which you can do using the SL website.

The works are taking place between June 24th and August 19th, and will continue each summer over the next three years. Big changes to the tunnelbana

Anyone who regularly uses the tunnelbana's green line in the south of Stockholm will be impacted at some point this summer by major works being carried out.

Between June 11th and August 19th, Stockholm transport authority SL is carrying out renovations on the green line, the oldest of Stockholm's three existing underground lines. The platforms at Gullmarsplan and Skärmarbrink are being almost entirely replaced, meaning significantly reduced traffic between Skarpnäck and Skärmarbrink, where the train will terminate. There will also be a reduced service between Farsta Strand and Gullmarsplan, where that service will terminate. That means that north of Gullmarsplan, commuters from all three lines will need to use the same line, line 19.

Passengers on line 17 (Skarpnäck) will need to change train at Skärmarbrink and Gullmarsplan in both directions, with an additional platform change on the northbound journey. On line 18 (Farsta Strand), commuters must also change train at Gullmarsplan, and change platform if travelling north towards the city centre.

SL has warned that the stations where train and platform changes are taking place will be unusually busy during rush hour, and advised passengers to expect significant delays and to check timetables beforehand as well as signs and loudspeaker announcements at the stations. If possible, passengers on the two affected lines are urged to avoid travel in rush hour or use alternative modes of transport where applicable. SL is operating replacement buses, with routes from Skarpnäck and Kärrtorp to Gullmarsplan between 7 and 9 am, and in the opposite direction between 4 and 6 pm. These buses will be direct, with no stops and a roughly 15-minute journey duration, and will run every six to ten minutes.

From Farsta Strand, it's possible to take the pendeltåg into the city centre (with stops at Årstaberg, Stockholm Södra, Stockholm City, and Odenplan), and users of both lines 17 and 18 have the option of taking a local bus to a stop on line 19 (Hagsätra), which will be running as normal.

It's not all bad news, we promise. If you are or know a young person in Sweden, they might be eligible for free travel every weekday between June 16th and August 9th. This should arrive in the post if the person finished grade 6-9 in compulsory school (up to grade 10 for special schools) or grades 1-2 in upper secondary school this year.

More information can be found here.