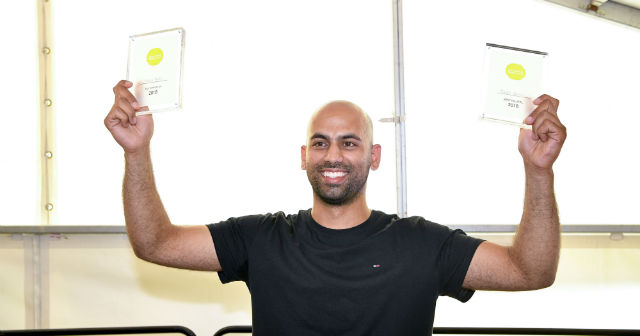 Yusef Houji from Copenhagen's Nordisk Falafel holds up hjs two awards. Photo: Johan Nilsson/TT
Nordisk Falafel, whose founder Yusef Houji spent a year and a half experimenting with different chickpea blends before opening last year, came top in two of the three categories, winning ‘best’ falafel overall and ‘best composed’ falafel.
Stockholm’s Falloumi won in the innovation category.
Hundreds of Malmö residents came out to the event to support their local restaurants and sample their different takes on the crispy fried chickpea balls, which originate from the Middle East.
“I love falafel, it's Malmö's national dish,” Amina Popal, who visited the competition, told Sweden’s Expressen newspaper. “A great falafel should be crunchy on the outside and well-cooked inside, not doughy. There should be fresh vegetables, garlic sauce, mild sauce and then a pita bread – that’s how a real falafel is made.”
None of the Malmö restaurants came away with a prize, despite the city fielding no fewer than seven of the 15 entrants to the competition.
Some of the city's best-loved falafel restaurants, including the renowned Falafel Baghdad, did not take part in the competition and controversially, none of the entrants came from the Middle East.
Some complained that the competition had been held the day after the Muslim Eid festival, which celebrates the end of the Ramadan fast.
“We had applications from all over the world, but in the end only 15 could attend. Some were small falafel restaurants and couldn’t close to come here and others were unable to come because of Ramadan,” Pierre Orsander, one of the organisers, told Swedish public broadcaster SVT.
Also, while a falafel roll from Nordisk Falafel costs 47 Danish Krone ($7.3) and one from Falloumi 85 SEK ($9.7), falafel rolls in Malmö normally cost just 25 SEK ($2.85).
Teams came from Stockholm, Osaka in Japan, Groeningen in the Netherlands, and Aarhus and Copenhagen in Denmark.
“We first heard of the International Falafel Award on Instagram. We had never been to Sweden before and decided to take part,” Taguchi Naoto of Gold Falafel Osaka said in a press release released ahead of the competition.
“The Falafel phenomenon is quite unknown here. In Japan there are only about 10 falafel places. Now, we hope that our Osaka falafel, cooked with much love, will charm the jury and lead us to victory in Malmö.”
Naoto sadly failed to pick up an award, but will presumably bring home tips and inspiration which will help him delight his customers back home.
Falafel rolls arrived in the city of Lund back in 1985. The first falafel restaurant in Malmö opened three years later in 1988.
But falafel rapidly began to supplant the city’s hotdog joins and the Malmö has now long since overtaken Lund as  the falafel capital of Sweden, with as many as a dozen restaurants to choose between in the Möllevången district alone.