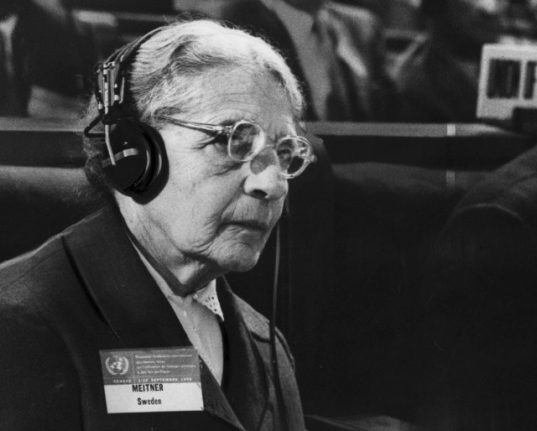 You're on a quiz show and the host tells you that you'll win the jackpot if you can name a notable immigrant to Sweden in history and briefly describe his or her major contribution. You have 20 seconds to answer. No internet, no lifeline. Can you do it?

Chances are, you can't.

With the immigrant population in Sweden at an all-time high, both native Swedes and immigrants could benefit from knowledge of how particular immigrants made lasting contributions to Swedish culture and society throughout history. Details like where they came from, why they came to Sweden, what challenges they faced, how they were received and perceived by Swedish society, and what legacy they left can serve as markers for anyone travelling or living the well-worn path of global migration.

As valuable as this knowledge can be, it is woefully lacking in Sweden’s popular history and educational curricula, and – by extension – in the minds of most people. But noteworthy immigrants in Swedish history exist in large numbers.

Though it only scratches the surface, the following small selection of important but often overlooked immigrants in Swedish history demonstrates this, and also shows that they are worthy of greater recognition.

Pioneers in architecture, journalism and religion

Sweden has traditionally been better known for emigration than immigration thanks to the great migration that caused the country to lose around 20 percent of its population between 1830 and 1930. This had a huge impact on Swedish history but has perhaps also overshadowed the periods of immigration that came before and after it.

In the period that came before, which stretched from the Middle Ages through to the early 19th century, it’s possible to find quite a few important immigrants to Sweden whose contributions, though significant, have blended into the proverbial woodwork over the centuries.

One of these, Nicodemus Tessin the Elder (1615-1681), was the architect of some of the most politically, culturally, and now historically important buildings in Sweden. Born in Stralsund, Germany, which was then part of Swedish Pomerania, he arrived in Sweden as a young man, and quickly made a name for himself, becoming Royal Architect under Queen Christina in 1646. Following a European tour, he returned to Sweden and was made Stockholm’s first City Architect in 1661.

As well as his outstanding architectural legacy, Tessin left behind a lasting personal legacy via his descendants. His only child, Nicodemus Tessin the Younger (1654-1728) was born in Nyköping and became a celebrated architect who achieved even greater fame and honours than his father. Married into Sweden’s high nobility and then elevated to it himself, Tessin the Younger designed his own palace in Stockholm, which still stands today. His children and grandchildren became notable figures in Swedish society and politics, and the art collection of his son, Carl Gustaf Tessin, still forms a central part of the collection of Sweden’s Nationalmuseum. Germans like Nicodemus Tessin the Elder represented one of the largest groups of immigrants to Sweden during this period, along with Finns, who were under Swedish rule until 1809. But immigrants to Sweden came from most European countries, including Austria, France, Italy, Scotland, Belgium, the Netherlands, and other Nordic countries.

Then, as now, there were also so-called “love immigrants”. One of these was Margareta Momma, née von Bragner, (1702-1772), Sweden’s first female journalist, and one of the first in Europe. Although Margareta’s early life is not well documented, according to Ann Öhrberg of Uppsala University, Margareta was probably raised in the Netherlands, where she likely met her husband, the Swedish publisher Peter Momma. The couple married in 1735 and settled in Stockholm where they started a family and a publishing business.

By all accounts, Momma was an active participant in the development of newspapers and periodicals produced by the family business. One of these was a publication known as Samtal, which, according to Öhrberg, “advocate[ed] on behalf of the intellectual abilities of women and their rights to education, argu[ed] against slavery…, [and] advocate[ed] religious tolerance…”.

She is remembered today through The Momma Award, which recognizes a Publisher of the Year who demonstrates excellence in Swedish publishing. Like Nicodemus Tessin the Elder, Momma also left a legacy via her daughter, Elsa (Momma) Fougt, who – along with her husband – took over the family business after the death of both her parents in 1772. Fougt became prominent in her own right and, after her husband died in 1782, she ran the publishing business on her own.

During this period, the Swedish government also encouraged certain ethnic groups to immigrate to Sweden, where their specialized skills and abilities were needed. Among these were the Walloons from Belgium and Savonians from Finland. Each of these groups made lasting contributions to Swedish industry, culture and society. Others, such as the Romani and Jewish people, had to overcome a variety of social and political barriers and biases in order to make their mark.

Despite being needed in and encouraged to come to Sweden, Jacob Marcus (1749-1819), like other Jews in Sweden, had limited rights and freedoms even after various “liberalizing” reforms in the 18th century. Marcus emigrated from Germany and settled in Norrköping, one of only three Swedish towns Jews were allowed to live in according to a 1782 law. His superior abilities as a merchant and businessman earned him special protections to operate various enterprises and thus contribute to the Swedish economy. Still, as a Jew, he was limited in where he could live and whom he could marry, and was forbidden from holding any political office.

Within this restricted environment, he nonetheless managed to make significant contributions to Sweden. For example, in 1790, he established the first synagogue in Norrköping and was the recognized head of the Jewish community in that town.

The brilliant and the brave

As the mass emigration from Sweden began to taper off and the First and Second World Wars raged, the country began to open up to an even wider variety of immigrants. Among these were members of the global intellectual elite who found a safe place to live and work in neutral Sweden. The Second World War also saw a relatively new type of immigrant enter Sweden: refugees.

Lise Meitner (1878-1968) was an Austrian-born physicist who fled to Sweden from Germany in 1938 to escape Nazi persecution. Later that same year, she and a small team made one of the most momentous scientific discoveries of the 20th century: nuclear fission. Meitner remained in Sweden and became a citizen in 1949. Unfortunately, not even her presence in Sweden prevented the Royal Swedish Academy of Sciences from unjustly ignoring her when it awarded the Nobel Prize in Chemistry exclusively to her partner Otto Hahn in 1944 for the discovery.

Poet Nelly Sachs (1891-1970) also fled to Sweden to escape the Nazi regime. In 1940, she escaped her native Germany and narrowly avoided incarceration in a concentration camp thanks to the intervention of Swedish novelist and Nobel Prize laureate Selma Lagerlöf. Sachs remained in Sweden and became a citizen in 1952. When she accepted the Nobel Prize in Literature in 1966, she credited Lagerlöf not only with saving her, but also with instilling in her a love for Sweden. A great many people in modern history owed their lives in part to the incredibly brave and selfless actions of another immigrant to Sweden, Norbert Masur (1901-1971). A German-born Jew, Masur was Sweden’s representative to the World Jewish Congress during the Second World War. On April 20th, 1945, Masur met personally in Germany with Nazi Reich Leader Heinrich Himmler – the man chiefly responsible for the systematic extermination of some 6 million Jews – to negotiate the release of Jewish concentration camp inmates to Sweden. His meeting secured the release of more than 1,000 prisoners; a number that was later increased to 7,000.

Ultimately, through the combined efforts of Masur, Count Folke Bernadotte, and the Swedish Red Cross, some 31,000 concentration camp inmates were freed and brought to Sweden for recovery. Though many of these eventually left Sweden, there are numerous individuals among those who remained who made important contributions to their adopted country and yet are little known.

In the decades following the Second World War, immigration to Sweden was vitally important to replenishing the labour force, which had been depleted by the long period of mass emigration. Baltic, Greek, Italian, and Turkish immigrants were among those who came to Sweden in the 1950s and 1960s to meet that need. In addition, Sweden opened its doors once again to refugees fleeing wars and other political conflicts, including from Chile, Yugoslavia, and the Middle East. Many of these more recent immigrants, along with those from the past decade, are still making their mark on Swedish history.

Only time will tell if they and the immigrants who came to Sweden before them will get their due in the annals of Swedish history, or will remain in the category of obscure knowledge reserved for the hardest question on the quiz show of life.