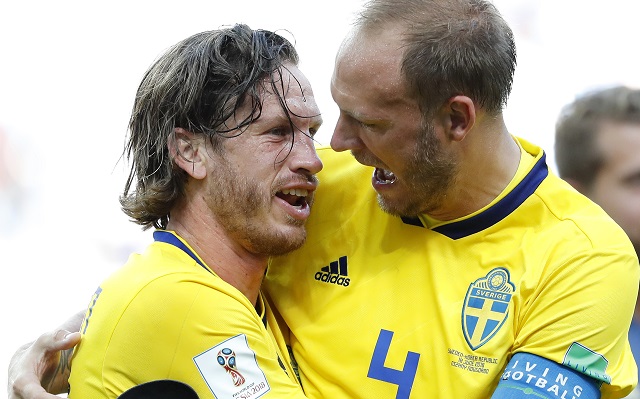 The German defence was ripped apart by Mexico's counter attacks, leaving Joachim Loew's side under intense pressure before the Sochi clash with the Swedes who beat South Korea 1-0 Monday.

“Germany were quite offensive and Mexico made some quick counters, did some two against ones and three against twos,” said the 33-year-old Granqvist. “It surprised me a little bit that they didn't have more balance in the team, they are probably going to change that against us,” he said.

“We thought of course Germany was the favourite to win the group but now they have a more difficult task, to win two games in a row,” he added.

MORE ON SWEDEN AT THE WORLD CUP:

“We are not the same type of players, we need to be very compact in defence and very solid”.

Even though a draw against Germany would be considered a good result, deadball specialist and midfield playmaker Emil Forsberg, source of much of Sweden's creativity, said his team “want to win every game”.

“But first of all we have to defend well and then see what opportunities we get to win the game,” said the RB Leipzig winger.

Scoring goals at major tournaments has proved a struggle though for Sweden.

At Euro 2016, they managed just one, an own-goal conceded by Ireland. Then it took a Video Assistant Referee (VAR)-assisted penalty scored by Granqvist to seal the win against South Korea.

But the goals have dried up since their playoff win against Italy last November. During a World Cup warm-up series of two defeats and two scoreless draws, they scored just once.