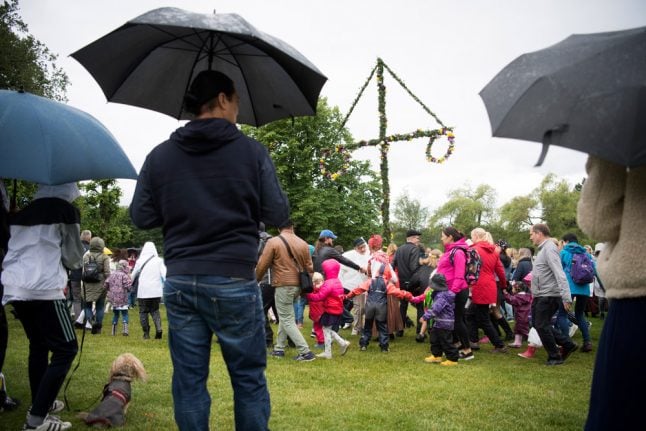 Midsummer celebrations in Stockholm's Hågelbyparken. Photo: Henrik Montgomery/TT
In the North Region, police had a heavy workload during the evening and night hours, with public drunkenness, drunk driving, noise complaints, burglary reports and rescue efforts.
Things were quieter in the Bergslagen Region, which contains Dalarna County and Örebro County.
“We had a bit more drunkenness and scuffles, but it's nothing serious,” Bergslagen Region spokesman Jens auf der Heide said shortly after midnight.
During the early morning hours, however, a rape was reported at a tavern in central Örebro resulting in the arrest of the male suspect. A case of arson was also reported in Horndal.
“But overall, it has been relatively quiet throughout the region. It has been like a normal weekend,” Per Vikman of the Bergslagen Police said.
Calm in western Sweden
In Western Sweden, the Midsummer celebrations did not cause any cause for concern.
“It has been a very quiet night and we have nothing to report,” police spokesman Jens Christensen said.
In Malmö, another shooting incident occurred but it was not immediately clear if it was connected to last week’s fatal shootings. One man was shot dead on Thursday in the city’s Lindängen district while three people were killed and a further three injured in a shooting on the Drottninggatan street in central Malmö.
Also in Malmö, there was a Midsummer incident in which a woman was beaten with a baseball bat and a man was stabbed with a knife.
“Otherwise, it's been like a normal payday weekend and absolutely nothing special. There was drunkenness and some fighting but nothing we couldn't’ handle,” South Region spokesman Fredrik Bratt said.
Several suicide attempts
In Stockholm, a serious theft occurred in which at least two people entered a man's residence, abused and threatened him and then stole two of his luxury cars.
In Märsta, a man was wounded in a shooting and a Midsummer celebration in Norrtälje turned into a minor brawl.
“Otherwise, I would say it was like a regular weekend. Some serious crimes, some fights and misconduct, and several suicide attempts but no more trouble than usual,” Mats Eriksson of Stockholm Police said.
Some problems on Friday were less serious. In Nås in Vansbro Municipality, the Midsummer Maypole broke at the middle while it was being erected. With a knife and some straps, quick-thinking revellers were able to ensure that the traditional dancing went off without a hitch.