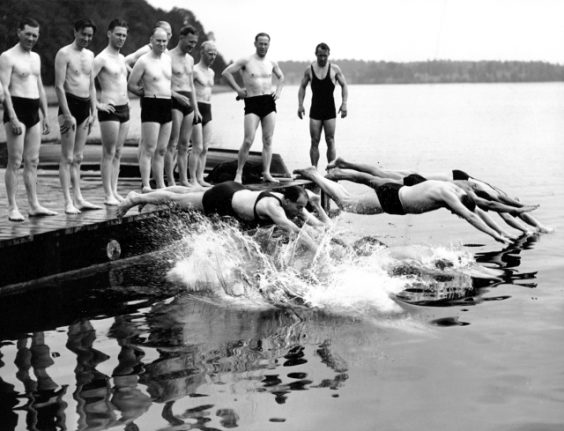 Who needs a hotel when you have a caravan and a make-shift fence made out of trees? This couple in Kalmarsand (and their dog) thought as much in 1974. 2. Chilling in the park

In 1978 Rålambshovsparken was already a favourite spot for enjoying the sun in Stockholm. This dad pushing his children in a stroller seems to be enjoying the summer in the capital city. 3. Sleeping under the stars

Wild camping remains a popular way to spend a summer vacation in Sweden, though the dress code has changed somewhat since this family slept under the stars in Flaten in 1929. Swedes have long been Swimming enthusiasts, as proven by this image of men and women swimming in Molle, Skåne over 100 years ago in 1900. In June 1969 Stockholmers had to deal with a breakdown in one of the main water lines combined with a heatwave. This poor dog found some quick relief in a fountain. Whether by the lake or the sea, you're rarely far from a beach in Sweden, and the sandy ones in particular are guaranteed to be packed in the summer time. This shot from the 1920s appears to predate the arrival of the bikini, but the revelers in Falsterbo near Malmö appear to be happy regardless. It's hard to walk any distance in Stockholm without running into a stroller, and this picture from 1979 of a woman preparing to take a day-trip to the archipelago shows that has long been the case. Even the royals relax a bit in the summer. Here's King Gustav V enjoying a spot of tennis during the summer of 1936. Though not as common today, summer camps were once a staple in Sweden. This image from the 1930s shows children playing during a getaway on an island in Stockholm's archipelago. 10. A rare spot of Midsummer sun

As anyone who has lived in Sweden will know, Midsummer has a habit of producing disappointing weather, with rain clouds making a point of interrupting the mainly outdoor celebration. The Midsummer of 1973 was one to remember however, as this shot of people enjoying the heat in Öland shows.