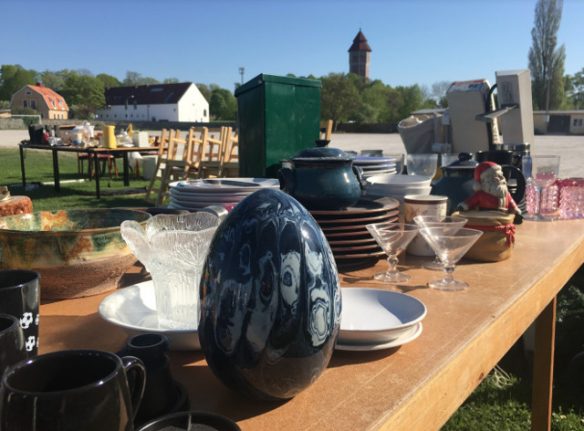 I find comfort in vintage. Old furniture, old brass vessels and my old pillow. They carry with them stories, of people and places. In their touch and smell lie our memories.

It is a trait I picked up from my father who had a knack for spotting old gold. I set up my home in India with Art Deco furniture that belonged to an aunt's grandmother. Seeing the grains of teakwood emerge, from beneath years and layers of paint, was like discovering forgotten treasure buried under a tree.

So on a sunny spring morning when a friend invited me to accompany her to the weekend Loppis, a 'yes' was a given. Loppis is Sweden's version of a flea market, and comes from the word “loppa”, which literally means a flea.

Come May and the Swedes take their spring cleaning rather seriously. Communities or a group of people – collectivism is the backbone of the Swedish way of life – get together and organise a loppis. And if you are in the “in” of things in your locality, you will know soon enough. In the times of social media, word of mouth still works.

Much like a flea market, old things are sold here. Old clothes, old vessels, old china, old LP records and old books; anything that has done its time in one place and is ready to be embraced by someone else. You might even find an antique artefact or two that can no longer be accommodated in all-white minimalistic decor of today. The loppis weekend arrived and we were set for some good bargains. Following directions of the handmade signs hung on trees and poles, we were soon weaving in and out of backyards of homes who had their second hand wares to sell.

My first bargain was two copper vessels; a classic beaten-copper jug and a pan I had seen Swedes use for warming food over a bonfire during treks. “Take both for 10”, said the elderly lady who had also displayed her fine china tea-set as part of the garage sale. Then she threw in a travel size moka pot to seal the deal. For 10 kronor I really could not have asked for more. My next acquisition was a picnic basket made of cane and lined with red and white checks on the the inside. Much like the ones I had read about in Enid Blyton books. That cost me 20 kronor, less than the price of a cup of coffee.

Happy with the bargain we went to the next spot. No. Nothing. And then another. But nothing really caught my fancy.

Back in the car, we drove to the next stretch of loppis homes. Here young women and men relaxed in their sun-chairs, sipping their drinks and waiting for customers. Music lent an air of festivity.

“This t-shirt cost me 10 bucks,”  my friend said, rather proud of her latest acquisition she picked up earlier in the day from the loppis we were at. 10 kronor for a t-shirt is a steal no doubt. But I had never bought recycled clothes in India.

Hand-me-down clothes for growing kids is common in almost every Indian household. Heirloom saris that are passed down generations are worn with pride at weddings and festivals. Old saris are also up-cycled into trendy cushion covers and curtains. Retro is cool even in India, but buying old clothes from a flea market is not exactly a fashion statement out there.

As my friend scouted around for dresses for which she would pay one-tenth of its original cost, I stood a few steps away, shuffling my feet. My lack of enthusiasm towards the second-hand clothes rack was evident.

“It is very fashionable to buy clothes at a loppis nowadays. It is sustainable too,” suggested my friend. “That is nice,” I replied.

The conversation ended, but the thought did not. That evening as I displayed my newly acquired bargains on the table, it was time for some introspection. If I was enthusiastic about old vessels that I considered artefacts, why was I reluctant to buy second-hand clothes? Is it because clothes are immensely personal or was it social conditioning? Perhaps a bit of both. But it was clear I had a mental block that I needed to shake off if I was serious about recycling and sustainability.

Think about it and the logic falls in place. The apparel industry is considered the second most polluting industry in the world, after oil. According to this report, fast fashion garments, which we wear less than five times and then discard, produce 400 percent more carbon emissions per item, per year than garments worn 50 times and kept for a full year.

Clothes are being manufactured on an unprecedented scale because people are buying more. But what if a significant percentage of fast fashion consumers shift to buying second hand clothes? Won’t it make a big difference in how much we produce?

The answers were in front of me. I think I am now ready to acquire my “badge of honour” at the next loppis.

As much we like to talk about our carbon credits to compensate for that trans-Atlantic flight, sustainability also lies in the small changes we make in our daily lives, in what we buy, how much we reuse and how we recycle. Ultimately, sustainability is a mindset and the good old loppis could be a tried and tested antidote that the doctor ordered to reduce our stockpile of waste.

Rupali Mehra moved to Sweden in the spring of 2017. She is a former television anchor & editor and now runs a communications consultancy. She can be reached at [email protected]