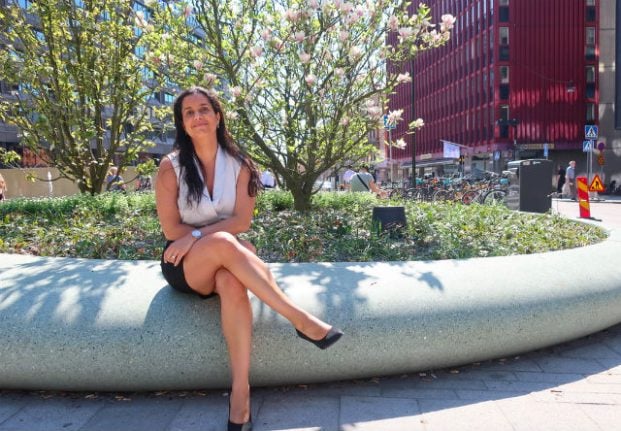 When Brazilian native Anna Xavier moved to Sweden several years ago it didn’t take her long to find full-time work. She was soon hired as a product developer for Swedish cosmetics company Oriflame, helping to develop around 400 cosmetics and 350 products each year.

Despite her extremely busy day job, Anna decided to start her own business on the side.

“It was a crazy idea to be honest, but I really fell in love with the idea of having my own business and brand,” says Anna.

Anna’s initial plan was to launch her own line of breastfeeding clothes, an idea she had after the birth of her daughter in 2014. She consulted a local startup advisory centre to start gathering information about how to set up her business.

Setting up a Swedish business

“Setting up my business was relatively easy. I just filled in a form on the Swedish Tax Agency (Skatteverket) website and payed a fee,” recalls Anna.

She advises budding business owners to make sure they choose the correct commodity code (varukoder) that describes the nature of the goods that are being imported. It’s a crucial step as this code is linked to the rate of duty applicable for different products as well as any other charges that must be paid on import.

“You need to be clear what your business sets out to sell, for example, cotton clothes or women’s leather clothes. It’s very detailed and there is an extensive list you have to go through and make sure you don’t miss something you might need later.”

Once Anna’s business was up and running, she set up her website and a business email address so that when she communicated with suppliers everything looked legitimate.

It was while in the process of contacting suppliers that she got the idea to start importing children’s socks from Brazil. Fortunately, the products came under the same commodity code that she had listed when she set up her company so she didn’t have to establish an entirely new business. She just needed to get the socks from Brazil to Sweden, which she realised may not have been as easy as it seemed. Luckily, the business she was dealing with was highly experienced in exporting goods.

Importing goods from outside the EU? Get expert advice from verksamt.se

“I contacted the company and they were very straightforward. They are an established brand in Brazil so they really knew what they were talking about.”

The problem came when she realised she was unsure of the regulatory requirements surrounding importing. Once again, she struggled to find the information in English so decided to do a trial run to figure it out herself.

“I didn’t know if there would be restrictions on materials or anything. I ordered a test shipment and was quite nervous but the benefit was that the company was experienced so they did everything correctly on their side.”

Everything went according to plan and it wasn’t long before Anna’s samples were delivered.

Importing goods from outside the EU? Get expert advice from verksamt.se

“There were no issues with customs. The transportation company called me when the goods arrived in Sweden and asked me to pay their service as well as the customs fee altogether, which I did. And then they did all the customs clearance and delivered the goods to my door.”

In part, this was due to the fact Anna used a shipping company rather than the postal service.

“Generally it’s best to use a shipping company when you have a certain quantity. It’s more traceable and a lot more of a reliable and faster service than by regular post.”

She explains that the shipping company ensures everything is done correctly, something which is in their interest too as otherwise they will responsible for returning the goods.

Since that first shipment of samples, it’s been fairly smooth sailing for Anna’s business. She does recommend that non-Swedish speakers hire an accountant who speaks the language to help with the tax forms as the Swedish Tax Agency (Skatteverket) can be strict when it comes to even minor errors.

For business owners planning to import products, Anna has one final piece of advice when it comes to ordering goods from outside the EU.

“Calculate your costs so that you actually make money. You have to add the cost of transporting the goods which can be expensive, add the Swedish customs duty (Tullverket) which is the importation cost, and then add the cost of VAT, which in Sweden is referred to as ‘moms’, for all of that, and pay it in advance.”

Importing from outside the EU? Get expert advice from Verksamt

She adds that you may get a later discount on the moms if you don’t sell as much as you have imported, but you need to have the money to pay for your estimated sales upfront.

“You have to take this into consideration when you’re planning your cash flow or you could get into trouble.”

This article was produced by The Local Creative Studio and sponsored by verksamt.se.