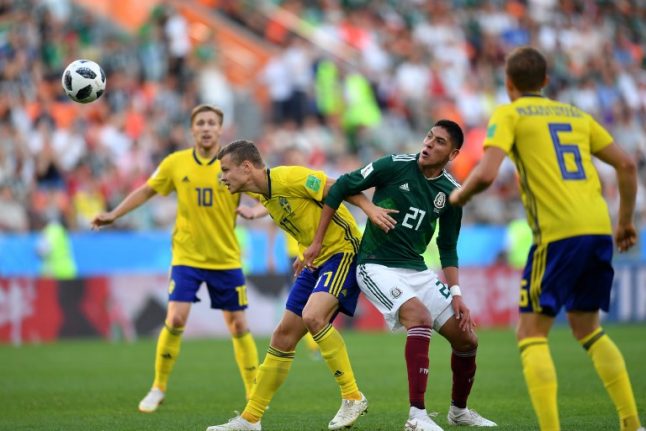 Sweden's midfielder Viktor Claesson (2L) and Mexico's defender Edson Alvarez (2R) vie for the ball during their World Cup match last week. Photo: HECTOR RETAMAL / AFP
Eriksson — who coached England to two successive World Cup quarter-finals, in 2002 and 2006 — said he was impressed with the job Southgate is doing with his young team in Russia.
England face Colombia on Tuesday in Moscow after finishing second in their group behind Belgium, while the Swedes play Switzerland in Saint Petersburg earlier the same day.
Eriksson believes Sweden, who topped Group F after beating Mexico in their final match, may not be playing scintillating football but says they are tough to score against.
“When you come down to the last-16, it is always difficult, and it should be difficult,” Eriksson told the BBC on Sunday. “I think England will beat Colombia, then I hope they will meet Sweden.
“I know that everyone wants to avoid Brazil, and maybe rightly, but I think it is easier to score against Brazil than against Sweden. Sweden are not playing the best football in the world, but to score against them is very difficult.”
Eriksson said not too much should be read into England's 1-0 defeat to Belgium in a group match that saw both managers make multiple changes.
“It was the second team of England and the second team of Belgium. It is different when you change five, six and seven players,” he said.
“I think both managers did well. When you have the chance in a long, hard tournament to rest players, you should do that.
“It is a hungry England team. They seem to go out without any fears at all, and that is good. They enjoy their football and they play without the fear of losing. The pressure is not there too much.”
Sweden's World Cup last 16 clash with Switzerland kicks off at 4pm on July 3rd.