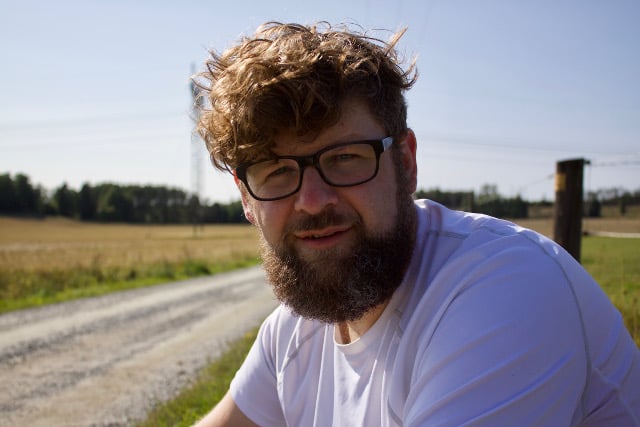 “I've been playing since I was around 13. I'm still only really good enough to know I could be a hell of a lot better,” Mackinnon, from Wirral near Liverpool, says modestly.

“I worked in business for 10 years, then became a teacher and taught in the UK for 4-5 years. But it's a tough slog teaching in the UK. I was encouraged by a lab technician who had worked around Europe with the British Army to give working abroad a go, so I started applying for a few different jobs.”

Sweden was only one of many different places with jobs he applied for. Had things worked out differently it could have been tropical warmth rather than harsh Nordic winters on the agenda. “I was offered an interview in the Bahamas but my mum was a bit terrified of the prospect of me being so far away,” he laughs.

Instead Mackinnon accepted a job in Stockholm and moved there in 2013. After settling and meeting his future wife Monika, he decided to organize an unconventional date in an effort to impress her – and though the desired effect wasn't achieved, it nonetheless had a lasting impact.

“On date four, trying to impress her, I thought I’d take her to the 'international guitar festival' in Gullmarsplan, Stockholm. It actually turned out to be a basement full of middle aged men and guitars way out of my price range!” “I've always enjoyed taking things apart and putting them back together, and around that time had stumbled across a Youtube video where they talked about taking a £100 guitar and ripping out then replacing the bad stuff. At the festival you could buy the individual parts – necks, bodies and so on, and Monika got chatting to a guy there called Rolf. He said 'you don't want to buy those parts, come to me and I'll show you how to do it from scratch'. It was total fate – the stars aligned.”

Four years later from that chance encounter, Mackinnon is still making regular visits to Rolf at his Västerhaninge workshop, where he has been learning the intricacies of taking pieces of wood and working them into beautiful instruments.

“He has been making guitars for 20 years and has all the equipment you could ever need in his basement. Anything you need to take a chunk of wood and bash it into a neck, guitar body or whatever else you may want,” he explains.

The apprentice makes virtually everything himself, with the exception of the pickups which are hand-wound in Manchester, and some of the metal work (though sourcing that and in particular brass parts has been something of a chore, and the Englishman asks us to appeal to any willing brass workers to get in touch).

Mackinnon feels he is still learning plenty of new lessons with each guitar he builds. It's a tricky art to master:

“I've come to realise over the four years that everything you touch has to be perfect. The ends of the frets for example: you have a tiny file and have to shape each individual end, so when you run your hand up and down the neck you don’t catch it on sharp metal work. Getting that level of perfection and detail right is a big challenge, but a nice one.” There have a few near misses along the way too, as is normal when working with wood.

“Yesterday I was trimming the back of the neck down and almost took off too much. Almost. I certainly can't afford to take off any more! You can always take more off, but you can never stick more back on. But I’ll make sure I don't do it again – There's nothing like doing something wrong to realise what you should be doing.”

But what exactly is the most difficult part of the guitar to build? The answer may not surprise anyone who plays the instrument, as there is one section where detail is more important than any other, and by extenion, the margin of error is smaller.

“The bodies are made out of alder which is soft, beautiful to work with, and you can sand it down and work it really nicely. But the necks are made of maple, which is hard as anything. It takes a lot of time to make the neck – it feels like you’re sculpting something. The transition from the neck to the headstock at the back is similar to a human wrist joint.”

“You have to look at it, see it's not right, then take off a few millimeters with some sandpaper. Bit by bit, until you nail it and get the right transition,” he adds.

Living in Sweden has allowed him to properly focus on improving the small details, thanks to the sacred nature of free time there compared to back home.

“The attitude in Sweden is more geared towards not always focusing on work. It encourages me to spend more time on the things I want to do. The UK is quite a tough place to be – you pretty much pay the bills and go out at the weekends. After you've done those things there’s not much time for doing anything else. Here it’s more encouraged to follow the things you really enjoy doing.”

“The possibilities in Stockholm have been great, because of the basement spaces you can rent as a collective for example. That has really facilitated the work. It’s possible to come and share resources here, which has really made things I hadn’t even imaged possible,” he continues.

Mackinnon's approach to his work is a balance of ambition and realism. While he is careful to make sure he doesn’t overextend his reach in terms of technique, at the same time he feels there is room for coming up with something new in a market dominated by models inspired by the big two of guitar manufacturers, Gibson and Fender.

“I've kept the guitars I'm trying to make quite simple. I want to get good at what I do. I’m really trying to get those things down and do them well. But a lot of guitar makers still stick very closely to designs inspired by Fender and Gibson, and I think there’s room for more. I have two body designs I’m happy with that are my own, and I’m sure there’s room for innovation. I don’t want to just copy what has already been done.” He has a hard time assessing his own work, but reviews from more neutral judges have been encouraging:

“You can compare a guitar that 20,000 kronor with one that’s 7,000 kronor and there’s no guarantee you’ll like the more expensive one. You don’t know until you pick it up and play it.”

In the long term, Mackinnon’s goal is to regularly produce and sell guitars. At present he is juggling his art with a full-time job teaching.

“The rate I'm doing it at currently, and with the amount of practice it’ll need to get good, it’s a slow burner. My intention is to sell them but that feels far off at the moment – though I’m open to offers obviously if people like my work!”

Sure I can show you how to make an electric guitar he said. That's how it all started way back in January of 2014. And sure enough a year and a bit later this beauty lay on the workbench. The very first Rascal guitar, with a beautiful quilted maple top I was lucky to find in Rolf's almost limitless supply of tonewoods, an alder body, and the only rosewood fretboard I'll ever make (on reflection tropical hardwoods, most of which are threatened one way or another, are not for me or my guitars). After this I was hooked! #RGJ00001

Even if production remains on a small scale for the moment, the luthier is already happy doing something he had no idea would become a fixture of his life. All thanks to saying no to the Bahamas and yes to Sweden.

“When I moved over here I had no idea I'd make my own guitars. Now I can't get enough of it,” he concludes.