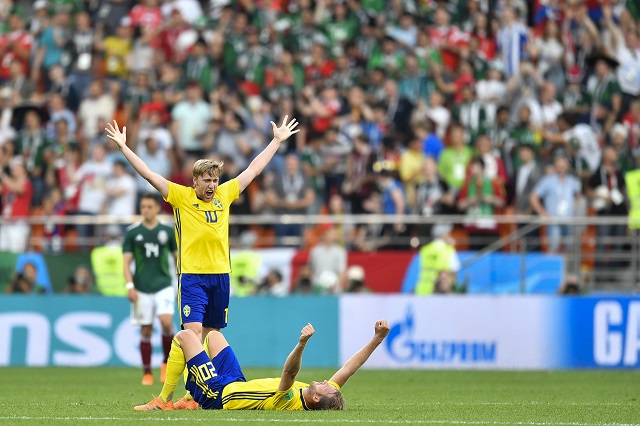 After eliminating the Netherlands and Italy in qualifying, Sweden played their part in sending defending champions Germany home early by topping Group F with victories over South Korea and Mexico.

In keeping with his squad, no-frills coach Janne Andersson is not a big name, having spent his entire playing and coaching career in his homeland. But the 55-year-old is credited with creating the collective spirit that has helped Sweden thrive despite a lack of standout individual talent.

“Sweden are definitely thriving as a collective right now, the like of which we have not seen since 1994,” when they reached the World Cup semi-finals, Swedish football journalist Kristopher Karlsson told AFP.

“Its been a perfect storm for Sweden with Zlatan finishing his international career and Janne Andersson coming in at the same time.

“Every single player has bought into Andersson's ideas of working hard for each other and having fun together as a bigger group outside the pitch.”

Arguably Andersson's biggest decision came when he decided not to welcome back Ibrahimovic when the striker opened the door to a possible return after Sweden saw off Italy in a two-legged playoff in November. Ibrahimovic claimed “a World Cup without me wouldn't be a World Cup” when Sweden failed to qualify four years ago.

Sweden's all-time top scorer angered many of his former fans with characteristically self-obsessed comments in the lead-up to the tournament from across the Atlantic, where he now plays his club football for Los Angeles Galaxy.

“I think it's the biggest party in football, playing in the World Cup. All the best players are there. Zlatan is not there… he should have been there,” he told reporters on the eve of the tournament. “The media says they are better without me so that's why I believe in them.

“This is the Swedish media mentality. I don't have a typical Swedish name.I'm not the typical Swedish attitude, behaviour and that and still I have the record in the national team.”

However, it is not just the media but those inside the Swedish squad who recognize the value in playing as a unit rather than hoping for moments of magic from one individual.

“As a team, we play as a collective, all the players together,” said goalkeeper Karl-Johan Johnsson. “With Zlatan, as a person, as a player he's an individualist, and the play goes around him. Instead, now, we play more the team all together.”

That strong team spirit has also been shown off the field. The entire Swedish squad stood alongside midfielder Jimmy Durmaz as he denounced the messages of racial hatred and death threats he received after conceding a late free-kick from which Germany's Toni Kroos scored to seal a 2-1 win.

Sweden have now gone as far as they ever did with Ibrahimovic at a World Cup and could go much further in a wide open half of the draw. Beat Switzerland and they will face England or Colombia, with Croatia or Russia waiting as potential semi-final opponents.

“People are delighted with getting this far but beating the teams we've beaten thus far and in qualifying, people think this World Cup is far from over for Sweden,” said Karlsson.