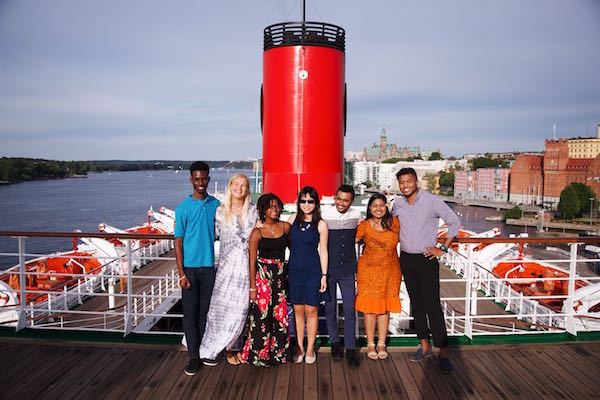 “People [in Sweden] know what they have to do, but when it comes to doing it, it’s not always respected,” said Anita Christenson, one of the participants at a climate change symposium which kicked off in Stockholm.

People need to take individual responsibility for the consequences of their daily habits, said marine pollution expert Patricia Villarubia Gómez. Commenting on the negative effects of waste in open water, she said: “It’s not a sea problem, it’s a people problem.”

Currently on its 98th Global Voyage for Peace, the idea of the boat is to provide a neutral space for its education programmes and awareness activities, and the Stockholm event was the first of six where young leaders from island nations affected by climate change will collaborate with government officials and organizations from Stockholm to New York.

Aster Assefe, who migrated to Sweden a few years ago, said the country needs to “integrate the issue into schools, and explain to foreigners what to do”, adding: “When coming from another country, it's not always easy to know how to manage waste.”

The ambassadors came from Fiji, Timor-Leste, Seychelles, Mauritius, Singapore, Barbados and each spoke about how climate change had already affected their home countries, through bleaching of coral reefs, increasing erosion of sea banks, the loss of coconut and banana trees, relocation of villages, and fewer fish in the sea.

Noting the example of the Pacific Ocean, where less than one percent of the environmental damage is committed but which is affected the most by climate change, they emphasized the need to confront these issues on both a global and local level.

“I have 13 bins in my kitchen and I throw away my waste three times a year. My neighbours have a huge pile [of non-recyclable waste] every week,” Christenson explained.

“I think there should be some ways to force people to do it right,” she concluded.