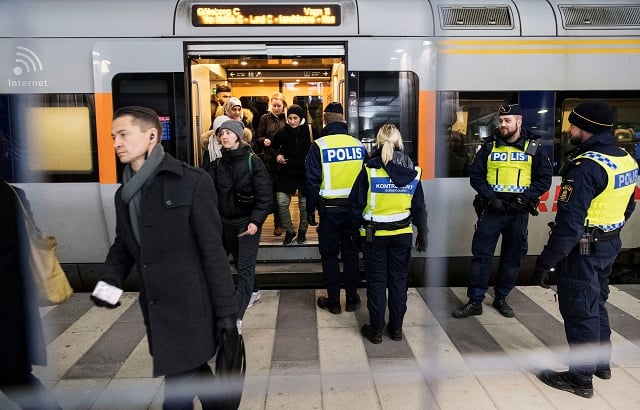 Border controls at the Öresund bridge between Sweden and Denmark. Photo: Johan Nilsson/TT.

From Monday onwards, police have increased the number of locations where temporary border checks may take place. The checks have been introduced to a total of 12 new spots, including some of the largest airports across the country, as well as ports in southern and central Sweden.

In autumn 2015, Sweden introduced border checks on car and train traffic at the Öresund Bridge, as well as at ports in Varberg, Gothenburg, Malmö, Helsingborg and Trelleborg.

Now, these controls will also be carried out at ports in Ystad, Karlshamn and Karlskrona as well as four ports in the Stockholm area. They will also be extended to five major airports: Stockholm's Arlanda, Bromma and Skavsta airports, Landvetter in Gothenburg, and Malmö airport.

“We'll be carrying out just as many checks as earlier, and we have the same staff numbers, but in more places,” Patrik Engström, head of the national border police, told TT during the Almedalen political week on the island of Gotland.

He said that a government decision in May gave police a mandate to carry out checks in additional locations in order to identify asylum seekers, economic migrants, as well as potential criminals and terrorists.

The checks won't be carried out at all the new locations all the time, but only “when deemed necessary based on the current situation”, according to a police statement.

“When Sweden reintroduced border control in autumn 2015, the situation was different, with a marked flow of migrants primarily across the Öresund Bridge and ferry traffic in southern Sweden,” Engström said in the same statement. “The assessment now is that the threat image is somewhat different than before.”

The controls will be in place until November 11th this year.